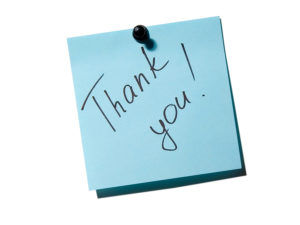 The entertainment industry has mastered the art of self-recognition, but it’s not exactly a model for the rest of the world.

It costs more than $20 million, for instance, to put on the annual Academy Awards shindig. Those little golden statues they give away? Roughly $45,000 each. And this weekend the music industry will celebrate itself by taking over the Staples Center, handing out Grammy Awards, and jamming along with the likes of John Legend, Lady Gaga, Adele, Bruno Mars, Beyoncé, and … well, you get the idea.

So let’s say you want to make recognition part of your culture, but you’re on a more limited budget. You offer up an occasional “Thank you” in the hallways and fire off a few “atta boy” emails, but you can’t afford Lady and the Tramp, much less Lady Gaga.

What more can you do? Plenty. Just ask Dick Nettell.

Now retired, Dick started his career washing cars as a “Lot Boy” for Bank of America and eventually became a senior vice president. He’s been a leadership hero of mine for years. If they handed out Grammy’s to leaders, he’d have a closet full of them.

Dick shared a story with me recently about Charlene, one of his former direct reports. Charlene ran a customer service center, and Dick wanted to honor her when she reached her goal of becoming a senior vice president.

So here are four award-worthy keys to creatively coming up with memorable, mind-blowing ideas to recognize people without spending a dime, all based on how Dick paid tribute to Charlene when he announced her promotion to SVP:

Recognition is a bit like music. Some like country, some rock, some jazz, some R&B, and some even like rap. Go figure. The way to effectively show appreciation for people is to start by knowing what tunes are important to them.

Dick knew the SVP title was important to Charlene because he paid attention. He knew what mattered to her at work and in her life.

“When you really listen to people,” Dick said, “you can tell what motivates them. It’s not a real difficult thing.”

You don’t have to spend $45,000 on a gold statue to provide a tangible keepsake marking someone’s promotion or achievement. In this case, Dick took the letter he wrote recommending Charlene for the promotion and put it in a nice, matted frame. (That actually might have cost more than a Grammy Award, which only costs about $14 to make.)

A pat on the back from the boss is one thing, but most of us find even more encouragement when the recognition comes from our peers and other co-workers. Find ways to get them involved in the celebration.

Dick actually closed the call center for a short period of time to bring everyone together when he announced the promotion and presented the framed letter to Charlene. But he also went one step further, which leads me to …

If you know what matters to someone, then you’ll have some idea of how you can personalize the recognition to make it memorable—like a great song that speaks to their soul.

Dick enlisted the help of Charlene’s administrative assistant, who tracked down about 25 people who had played some part in Charlene’s success. After he announced the promotion and she was stepping forward to give an acceptance speech, Dick stopped her.

The people on the list all were on a phone line, and each then said a few kind words about her for everyone to hear. When they got to the final caller, they heard a hesitant, elderly voice: “I just want everyone out there to know how proud I am of the little farm girl from North Dakota.”

It was Charlene’s mother.

“I’ll remember those words until the day I die,” Dick said. “There wasn’t a dry eye in the house. It didn’t cost a dime, but it meant the world to her and everyone else who participated.”

Dick knows recognition is essential to building strong relationships, which is essential to great leadership. His philosophy is that “if you grab people by the heart, the head comes along for the ride.” And he knows there’s no good reason for not doing it.

“People say they don’t have the budget or they aren’t allowed to do anything in their environment,” Dick said. “Those are all excuses from people who just aren’t willing to do the work to recognize people in a meaningful way. It doesn’t have to cost anything.”