In response to the challenge in my previous post, Bob “Batch” Batcheler launched himself on a personal Do What You Say You Will Do campaign. He shared his experience in the comments:

“One of the things that I am trying to do is to write down EVERY commitment/promise that I make. While that may sound obvious, it is a real change in habit for me. It makes each commitment much more real, much more like a contract. I am capturing them in Evernote, so they are always with me. I will let you know how my progress goes.”

True to his word, Batch reported back the following week:

“So here’s my score – 69 promises kept out of 107 promises made. I am batting 0.644; better than I feared, but nowhere near what I aspire to. Here was my process – for the past week, I captured every promise / commitment I made. As some of the other folks suggested in these comments, I captured promises to myself, my family, my co-workers and anyone else that I interact with. I also captured implied commitments, like the one I made to you to let you know my progress. Then, at the end of each day, I scored myself, rolling over/rescheduling any promises not kept that day. A promise rolled over to another day counts as unkept in the total, and kept when it is delivered; I am not sure about that part of my scoring – that that’s the right way to account for something not done – but it does force me to evaluate when I can actually deliver on a promise that’s blown. There probably should be some metric for promises delivered when originally promised. I may try that next week.”

If you’d like to build on Batch’s work and/or try it out for yourself, here’s a simple 4-Step Process to get you started:

1. Capture every overt promise/commitment you make to

2. Capture every implied promise/commitment you make.

3. Score yourself at the end of each day.

4. Assess your performance at the end of the week.

[Tweet “”Capture every overt and implied promise you make.””] 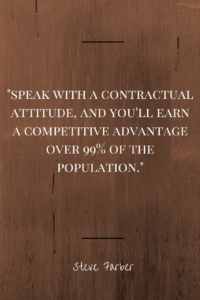