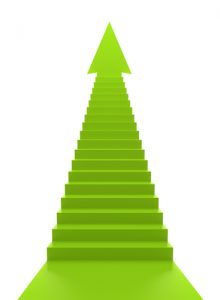 When the company taps you on the back, don’t look back.  Think about what you need to do (and what not to do) to make yourself successful in your new role.

If this scenario hasn’t happened to you, or not recently, it is surely something you dream about. You’re called in to the boss’s office for a meeting. There, you get the happy news that you’ve been tapped for a new role at your company, possibly with a new title, maybe with more money and a better set of perks. What could be better for the ambitious ladder climber? (Not that you’re ambitious in the negative sense of the word.)

For the really adept multitasker, it’s only a matter of hours before all kinds of counterproductive ideas start to take root in that newly promoted head. You’re efficient; that’s why you got the promotion. But don’t be efficient at second-guessing and sabotaging yourself, not at a time like this! Here are four things you need to do immediately after getting that promotion:

Own It. No “survivor guilt” for you!

A company often moves in mysterious ways, which are not always clear to everyone. If you got a promotion, someone has said “I believe in you.” You should at the very least be saying that to yourself, too. Suppose two people are working in similar jobs in the IT department of a large corporation. Then the company reorganizes, jobs are shuffled, and suddenly one is promoted, while the other is told “keep up the good work.”

But should the person getting the promotion feel guilty that her equally hard-working colleague didn’t get what she got? If she does, she may be on the road to sabotaging her own opportunity by apologizing for it and minimizing its importance. Instead, it’s not only okay but healthy to be thrilled at your good fortune, and to be empathetic and friendly but not defensive with your colleagues. Their turn will surely come if they’re as good as you think they are. In short, own your success and agree with it. That’s the healthiest way to absorb the news: as a vote of confidence that you’ve earned.

Give yourself permission to be nervous.

On the other hand, if you have absolutely no doubts about your ability to move into a new role, you’re not being realistic. What can be helpful is to really look at what you’re nervous about. Use some of those organizational skills that got you promoted, and make a list. “I am afraid I can’t do the job” is not specific enough and will only make you more nervous. “I am worried about the PowerPoint presentations I’m now expected to make once a month” is actually helpful—now you can think about doing an online tutorial or checking in with the PowerPoint geek in residence at your office for some tips.

“Break up” with your old job once and for all.

Too many people try to keep doing their old job and don’t seamlessly take on the new role. Treat it like a breakup and let yourself eat the gallon of Ben and Jerry’s and listen to the sad (or happy) music for a weekend or so; then really, truly move on. Let the new occupant of your old chair have it, and walk into the new role without looking back.

Bring some people with you where you’re going.

Now that you’ve been given more power and control in the workplace, don’t just grab it all for yourself. Think about finding ways to use your new sphere of influence for the good of others.

Are different people reporting to you now? Think about giving them projects that will let them grow and lead to their own future promotions. Ask yourself as you absorb the thought of living up to this promotion, “What can I do to help my new boss, my new colleagues, and my new clients?” The IT employee in our example above might consider how she can include her old colleague in the next interesting project she gets to lead. That way, she spreads her good fortune around, and that’s the way to make your success of today into a permanent condition.