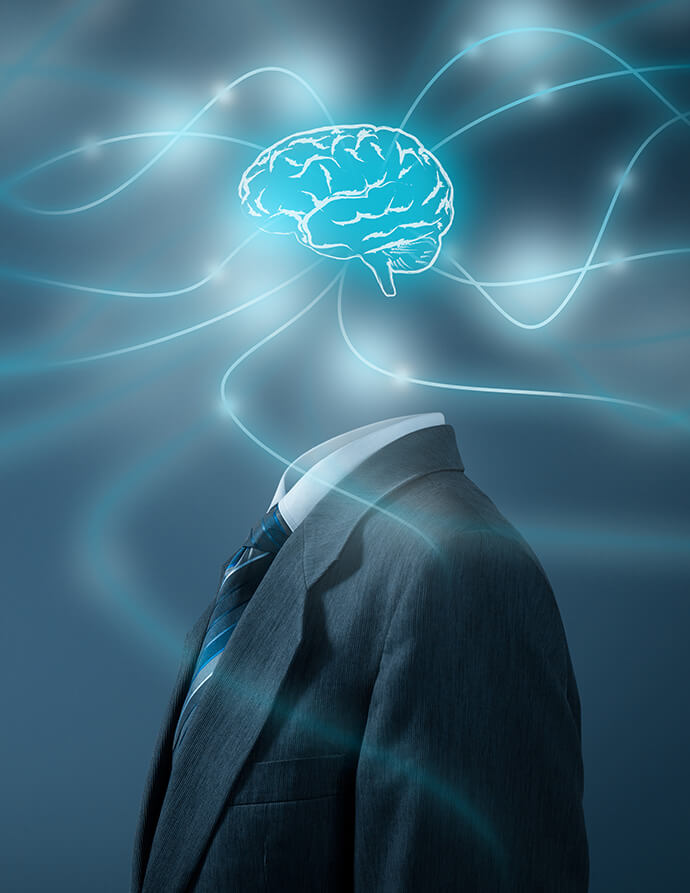 Many so-called thought leaders spew a jargon-laced mish-mash of business nonsense that goes something like this:

If your core competencies and best practices aren’t producing buy-in and you feel the need to empower more synergies so you can move the needle to avoid a burning platform in your ecosystem, then you need to leverage your outside-the-box thinking and make hay with a robust, scalable solution.

Here’s the truth: Real thought leaders don’t deal in such jargon. It’s not a part of their … what should we call it … oh, yes, their body of work.

Unfortunately, the term “thought leader” has been co-opted by so many posers that it’s lost some credibility in the business world. It seems like everyone wants to be known as a thought leader, but there are no real criteria for who can stick that label on their marketing materials.

So what is a real thought leader?

Russ Alan Prince and Bruce Rogers, who co-wrote a book about making your company a thought leader, define it as an individual or firm that others (even competitors) “recognize as one of the foremost authorities in selected areas of specialization” so that they are considered the “go-to individual or organization for said expertise.” They also say a real thought leader “significantly profits” from that recognition.

That definition is more than a mouthful, but it’s also accurate. I’d boil it down to this: Leaders who’ve become undisputed experts in their fields. If you go by my definition, or the longer version from Prince and Rogers, you realize pretty quickly that any old clown can’t be a thought leader, no matter what said clown puts on his or her business card, website, or marquee.

Real thought leaders, however, provide amazing value because they offer insights that really do help you and your business succeed. They are way out in front of the jargon, because their skills, experiences, and expertise allow them to see what most others are missing. So it’s important to pay attention to the real thought leaders, while avoiding the clowns who are building their businesses on the buzzword rather than creating the buzz.

As an author, speaker, consultant, coach, and, according to some, a thought leader on Extreme Leadership (and according to others, a clown, I suspect), I spend a good bit of time looking for the real thought leaders in business. They challenge my thinking and open my mind to new and better ways of leading. Not only do they provide great insights I can use, but they help me come to original conclusions and ideas of my own.

With that in mind, here are seven bona fide business thought leaders I’m watching in 2017—and some of whom I’ve followed and been influenced by for a very long time. They will never steer you wrong.

Jim Kouzes and Barry Posner, Co-founders of the Leadership Challenge

OK, so that’s two-for-one, but Jim and Barry go together like surfers and big waves. These guys – my most significant mentors – have been studying and writing about leadership for more than 30 years. The Leadership Challenge remains a must-read for any student of leadership (the new, sixth edition has 70 percent new material). And their current database now includes around 1.3 million responses to their Leadership Practices Inventory (LPI) survey. That’s a ton of great data, and these guys know what to do with it. They have a joint Twitter presence as @TLCTalk.

Once upon a time when I worked at the Tom Peters Company and Pat worked for the software company Sybase, he was my client. Now, of course, he’s a rock star author, speaker, and consultant, not to mention founder of The Table Group. But we shouldn’t confuse correlation with causation. Pat is one of those guys who know how to see through the fog and illuminate really practical, powerful and—most important—actionable principles. He’s written 11 books that have sold more than 5 million copies, and he’s still coming up with fresh ideas and insights on leadership and organizational health. Check him out on Twitter at @patricklencioni and subscribe to The Hub, his new online publication.

Brené Brown, Founder and CEO of The Daring Way and COURAGEworks

You will be hearing more and more in the coming months and years about living, working, and leading with authenticity and vulnerability. But what does that really mean? Well, Brené can tell you in ways that connect emotionally but that are backed by data. As a research professor at the University of Houston, she’s spent more than a decade studying “vulnerability, courage, worthiness, and shame.” Her books are bestsellers, and her TedTalks have been viewed millions of times. You want to give your life a lift? Just Google “Brené Brown quotes” and spend five minutes reading her pearls of wisdom. Sign up for her newsletters and follow her on Twitter @BreneBrown.

Tom Peters, Founder of Skunkworks and The Tom Peters Company

OK, you young whippersnappers of the world, pay attention. Those of us in the over-50 crowd can tell you that Tom remains one of the most brilliant business thought leaders of all time. If you haven’t heard of him and if you aren’t listening to him, well, that’s how I define tragedy. Tom, the author of In Search of Excellence and 16 other books (and my former employer, to boot), lives mostly on Twitter these days @tom_peters. Tweet him a question or offer a comment, and chances are pretty good he’ll respond to you. Seek this Yoda, and tragedy your life will not become.

If you had two decades and $1 million, what would you do with it? Dave used it to hack his own biology. Normal people don’t do that. Clowns who claim to be thought leaders don’t do that. Dave isn’t a clown and he’s not normal. The results of all that bio-hacking has produced what he calls the idea of becoming bulletproof – “the state of high performance where you take control of and improve your biochemistry, your body, and your mind so they work in unison, helping you execute at levels far beyond what you’d expect, without burning out, getting sick, or allowing stress to control your decisions.” Smart entrepreneurs and executives know there’s a future in learning what it takes to become bulletproof. Subscribe to his podcast, read his blog, and follow him on Twitter @bpnutrition.

Tasha is one of those overnight sensations who has been at it for more than a decade. You know the type: They work hard and don’t take shortcuts en route to becoming a fresh, new voice. She spoke at my Extreme Leadership Summit in 2013, and I became a fan for life. Tasha is an organizational psychologist with a scientific understanding of human behavior, but she’s pragmatic when it comes to dealing with leadership challenges and conversational and down-to-earth in her communication. Follower her Twitter feed @tashaeurich and pre-order her new book on self-awareness.

There are thought leaders who research, research, research and study, study, study, and then pull insights from all of that work that make us better leaders. And then there’s Elise. It’s not that she hasn’t done her fair share of research and study, but she achieved thought leadership status by graduating at the top of her class in the School of Experience. Elise built a PR company from scratch in the Middle-of-Nowhere, Arkansas, and turned it into the jewel of her industry. She compiled many of her lessons into Leading Through the Turn, which is a cool story that shares how her love for motorcycle riding taught her to be a destination leader with a journey mindset. She’s on Twitter @elisemitch and she regularly writes a blog that will inspire and enlighten you as a leader.

Clown-free thought leadership isn’t always easy to find in a buzzword world, but it’s worth the effort to seek it and listen to it when you find the real deal. These seven are the real deal, because people recognize them for their expertise and they make a living at least in part by sharing what they’ve learned. They won’t fill your head with jargon. They’ll just give you the perspective and insight you really need.