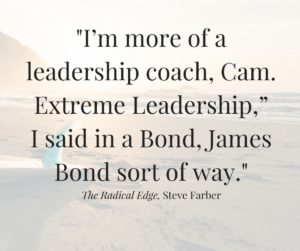 Rich punched a button on his phone and a few minutes later Cam threw the door open and sauntered into the office. He looked like—how can I say this nicely—a cocky GQ wannabe. He wore tasseled loafers, wool pants with razor¯sharp pleats, a silk shirt, and enough hair products to slick a porcupine. He may as well have been wearing a sign saying, I make money. I really do try to resist snap judgments, but my first thought, I have to admit, was Danger, Will Robinson! I stood up and shook his hand as Rich made the introductions.

“So,” said Cam as he gave me the once¯over, “I understand you’re going to give me some of the latest, cutting¯edge sales techniques. I’m all ears for anything that’ll keep me on top of my game, dude.”

I looked at Rich. “Sales techniques?”

He flushed. “Well, Cam, that’s not exactly what I had in mind by inviting Steve to work with you.”

Cam stiffened as if someone had just stuck a live wire down his Armanis. “What do you mean?” The question caught in his throat. “What’s goin’ on here?”

“I’m more of a leadership coach, Cam. Extreme Leadership,” I said in a Bond, James Bond sort of way. “Rich has asked me to help you get a handle on leading your sales team.”

“Why?” he asked, shooting a look at Rich.

“Look, Cam,” Rich began. “It couldn’t hurt for you to expand your skills in that area. We all know that you’re the man when it comes to selling. No one’s going to argue that point. But… you’ve got to get your leadership act together if you’re going to be a part of this company’s future. Don’t act as if this is a total surprise. It’s not like we haven’t talked about this before, right?”

Now it was Cam’s turn to flush. I watched the redness rise from his neck to his ears to the top of his forehead. Thar she blows! I thought. Then as quickly as his skin had erupted, the color dissipated and he regained his composure.

“Tomorrow morning,” I said. “And what do we do first?” “We have breakfast.”

The morning was gray and overcast; the kind of day that gives June Gloom its name. This was December, however, and the Mission Beach coastline was doing that water and sand thing without the slightest inclination or care about what my day was going to be like. I don’t know why I love gray beach days, maybe it’s because they make me look differently at the pounding waves and squawking seagulls. The birds and the waves don’t care if the sun’s out or not. That’s not a bad attitude for a human to adopt.

Just before the north end of Mission Beach turns into Pacific Beach, Mission Café abuts the boardwalk. You can get a cup of coffee and a muffin and sit right outside where the action is. Cam and I found a spot at a table behind the short retaining wall that separated the porch from the boardwalk. I took in a full, deep breath of sea air. Man, what could be better? My morning coffee, steaming and potent; the Pacific, rolling and churning; the beach walkers, strolling and talking, all of it reminding me—not that I needed it—of how much I loved this place. The air smelled of suntan lotion, which told me that despite the cloud cover, the early morning crowd was characteristically optimistic.

I’m always amazed by the variety of earnest morning walkers: college kids clipping along in their baseball caps, cargo shorts, and tight laced Adidas, older folks glad still to be walking at all, skaters on their boards, and bikers riding backwards on their handlebars. It’s quite a parade—not the kind that would have inspired John Philip Sousa, but I never really cared for his music anyway. All this I kept to myself. Cam, however, was more external with his thoughts than I was. I slowly realized that he was spewing forth an endless stream of color commentary on  the overweight, over thin, over plasticized, over or under whatever  of  every  person  passing  by. He didn’t realize it, but he was pushing my buttons as rapidly and aggressively as a rat beeping a scientist for food. It didn’t sound like anger so much as condescension, arrogance, and an overall these people suck perspective on the scene.