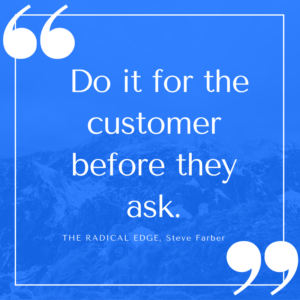 “I’ll explain it to you later, southpaw,” I said, patting his hand, and immediately regretting my patronizing tone.

Cam put the cup down and rolled his eyes toward the ceiling. Mary Ellen walked away, chuckling under her breath, while Agnes reached across the table and laid her delicate, vein
ed hand on Cam’s.

“I’m sorry, Cam. That was very rude of us, but I assure you that it wasn’t mean-spirited. Will you forgive us?” She went on to explain Rosenbluth’s story. “That kind of observant, do it for the customer before they ask approach is just the way we do business here at The Wake-Up Call. I’ve done it that way my entire life. And that’s ninety-plus years.”

“But who’s counting?” I chimed in.

I let that sink in for a moment. “With respect, Agnes,” I said. “There’s clearly something very special about you and your diner.”

“Thank you,” she smiled.

“You’re welcome, but that’s not where I was going. For some reason, Edg sent me here to talk to you, but—and again I mean no disrespect—but why? I mean, I’ve eaten in a lot of great diners and restaurants but there’s got to be something more to this; am I right?”

“Well, yes. There’s always something more than what meets the naked eye, true?”

“True, but…” I was trying to think of a polite way to ask the question, but I was striking out. “To put it bluntly, Agnes, who are you and why are we here?”

Much to my relief, she laughed and said that she’d be happy to tackle the first part of the question. “But first things first,” she said and waggled her fingers in the air to catch Mary Ellen’s attention. She nodded at Agnes and then disappeared into the kitchen just as another server appeared at our table to refill our drinks. A few minutes later—it seemed like seconds, really—Mary Ellen returned with platters of sliced pastrami, roast beef, ham, and turkey, three kinds of cheese, French fries, onion rings, rolls, bread, condiments, potato salad, coleslaw and crisp, kosher dills. Cam and I stared in stunned silence.

“The Agnes special,” Mary Ellen said with a smile. “Help yourselves, fellas.”

Believe me, we did. As I assembled my first sandwich, Agnes began her story. And I enjoyed every blessed minute.

Agnes Golden grew up in Chicago in a middle-class, black family who had high hopes that she would apply her terrific intellect and relentless drive to the practice of medicine. For as long as Agnes could remember, however, and to the shock and horror of her parents, she wanted to be a foodie. She wanted her own bar, restaurant, café, or even a hotdog stand on the pier at Lake Michigan. She wanted to make simple comfort food, serve it to fanatically loyal customers, and revel in the reputation that could only come through a truly inspired and mystical bowl of chili.

When she was in the fifth grade, she would fantasize about turning her family’s home into a  burger  joint with very limited and exclusive seating and a celebrated reputation for the most sublime, and coveted, secret sauce in the city of Chicago. As she experimented in the kitchen she would imagine the crowds lining up along her street, waiting for hours with great anticipation for a precious seat at one of three tables set in the small living room.

That childhood fantasy stayed with her on some subtle, preconscious level all the way up through grade school, middle school, high school—where she was a star volleyball player,—college, and even through her first year of medical school. The pressure of being a female African-American med student in those days was significant, to say the least, and Agnes found her grades sliding down to average and her mind drifting more and more frequently back to her restaurant dreams.

She helped pay her way through school by waiting tables, which was no shock to anyone in her family, but when the excruciating time demands of med school forced her to choose between her restaurant job and poking at cadavers for a C average at best, she quit school. The irony of her quitting med school nearly causing her father a heart attack was not entirely lost on her. But it also didn’t stop her from begging her dad for the money to finally start her own business and bring to fruition that small seed that so many of us leave buried in the soil of our childhood memories.

Agnes’ Real Chicago Hot Dog and Chili Palace was born and the first menu-fliers printed on Agnes’s 20th birthday. 31 years later, she sold her chain of 21 Palaces and, at the wheezy old age of 50-something, having achieved the rarified status of Chicago restaurant maven, moved to San Diego to retire.

She bought a big house in Del Mar overlooking the ocean and spent her days hanging out on the beach and learning to surf from some of the local legends, who became her second family.

“But old foodies never die,” she said, picking a crisp onion ring from the wicker basket. “So I bought this little building and opened The Wake-Up Call so I could feed my friends and make a little money while I was at it. Just for fun, you know.”

I practically choked on my cheddar roll and for a panicked moment hoped that Dr. Heimlich was in the house.

“What?” he exclaimed. “I’m just asking a question. You are, right?”

She was the embodiment of graciousness. As far as I was concerned. I’d have clobbered Cam with a cast iron skillet, if I were Agnes. Although I did have to give the boy points for focus, in that lovely story of Agnes’ pursuit of her lifelong dream, all Cam saw was the payday. There could never be a drop of doubt that money was his prime boat floater.