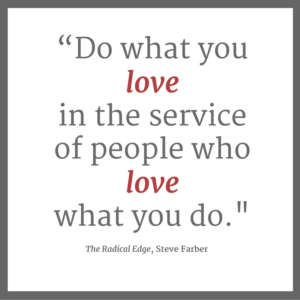 “It’s all about the money for you, isn’t it, Cam?” I said with rising vexation. “Isn’t there anything else that turns you on? Anything?”

“Look,” Cam said with an appetizing mouthful of coleslaw. “You’re supposed to be helping me with my business, aren’t you?”

I took a bite of my sandwich. “Well, aren’t you?” he persisted.

I turned to Agnes and explained the circumstances that had brought Cam and me together for the day, though I left out the details about the precariousness of Cam’s employment situation. “Yeah, of course,” I answered, setting my food back on the plate. “That’s the general idea, sure.”

“It’s not the general idea; it’s the whole idea. And business is about making money. That’s it. No money, no profit, no business. Game over; end of story.” He kept his eyes on mine but pointed a finger at Agnes. “This nice old lady here—no offense, Agnes—has obviously made tons of money. Don’t even pretend that’s not important, because it is. Jeez, Farber. It’s almost like you think she should apologize for it.”

“I’m just saying,” I frothed, “that you should open up your freakin’ eyes to other…”

With a surprising burst of energy,  Agnes  sat  up and reached her hands across the table. Like a mother intervening in her children’s sib spat, she grabbed each of us by the chin and pulled our faces toward her so we were both looking her in the eye. She didn’t let go and—okay, I’ll admit it—it started to hurt. I can’t imagine what this scene must have looked like to the other customers, and when someone across the diner laughed, I was certain it was at us.

“Boys,” Agnes said in a controlled voice. “It’s time for you both to, and I mean this in the nicest way, shut the hell up.” It was as though this gentle, innocent old lady had morphed before my eyes into a steely disciplinarian. Still clenching our chins in her sinewy fingers, she began, once again, to smile. She let go and gave each of us a pat on the cheek.

“May I speak?” It wasn’t really a question. “Thank you. Cam is right, Steve. I’m proud of the money I’ve made over my lifetime. There is no point in starting a business, whether it’s a restaurant, or a—what is it you do again?”

“Right, mortgages. Whether it’s a restaurant, or a mortgage company, or a carpet cleaning operation, or a pharmaceutical company, the business has to make money. And the more the better, I say.”

“Well, there you go,” said a triumphant Cam with a wave of his fork. “That’s what I’m saying.”

“Steve?” She raised her eyebrows at me. “Care to chime in?”

“Never enough,” she repeated. “And where does your money come from?”

He took another bite of coleslaw. “Selling mortgages, like I said.”

“Mmmm… hmmm,” she mused. “And where would you guess mine comes from?”

“I see people having lunch.”

He slowed his glance around the room slightly. “OK, there are people talking and laughing and eating and there are waitresses doing the same.”

“And how many tables are empty?”

Cam craned his neck around. “Well, none, that I can see.” “That’s right. Not an empty table in the house, and

there rarely is. Do you know why?”

He shrugged matter-of-factly. “Food’s good.” “Thank you. Anything else?”

Cam’s face betrayed that he was drawing a blank. “Does  it  look  like  people  are  enjoying  themselves,

“How about all those people waiting outside?” “What about them?” I finally chimed in.

“Do they look miserable?” She didn’t wait for an answer. “No! They look happy, don’t they?”

It was true. Everyone—whether eating at a table, waiting for food, or standing in line—seemed genuinely cheerful. It was kind of odd, now that I’d noticed it. Odd in a wonderful way.

“Try me,” he said in a patient, almost patronizing, tone. “It’s because I love them,” whispered Agnes.