I’d heard this theme before from Pops, of course. I’d been struggling with his mantra, “Do what you love in the service of people who love what you do,” and trying to put it into practice in my own life and business. So it was a little jarring when I heard what Agnes said next: 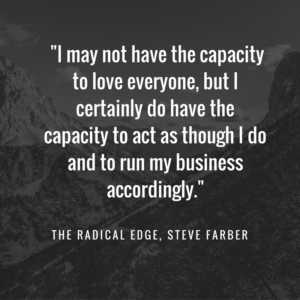 “This is how you stoke the fires of your success, Cam, by doing what you love in the service of people you love, who, in turn, love what you do for them.”

“Uh-huh,” muttered Cam. “So you’re honestly telling me that you love every single individual human being that ever stepped into one of your restaurants for the last seventy-some-odd years.”

I thought he laid out the challenge quite well, actually.

That’s exactly the thing that I was wrestling with, too. I sat up and leaned forward to hear Agnes’ response.

“I wish I could tell you that,” she said, folding her hands on the table. “I wish I could say that I have a heart big enough and a mind clear enough of judgment to embrace nothing but the goodness in every single person on this planet, saint and sinner alike. But I can’t.”

“So what are you saying then?” I asked before Cam had a chance to throw a barb.

“That’s not the word I was thinking,” said Cam.

“Think what you will, honey, but it is really very practical. I may not have the capacity to love everyone, but I certainly do have the capacity to act as though I do and to run my business accordingly. And if I and my team can really do that, then no other business in my market space can come close to the experience that we give our customers.”

Cam set his fork down. “Then explain something to me, please. How come I make so much money?”

Agnes tilted her head at him. “Why don’t you tell me?”

“Yes, I will.” He leaned back in the booth and laced his hands behind his head. “It’s not lovey-dovey, I’ll tell you that. I work my ass off; no one works harder than I do. In at 6:30am, out at 10:00pm most days. When I was a sales agent I’d make hundreds of calls, and if no leads were coming in, I’d go through the damn phone book, if I had to. My business is all about the transaction, the loan. I close the deal and someone else takes it from there. It’s a numbers game and nothing else. And I’ve always generated more numbers than anybody.”

“Wow, you have a great work ethic, to say the least,” said Agnes with all sincerity. “And you must get a lot of referral business.”

The comment stopped him for a moment and he shifted in his seat. “Nah. Don’t need it.”

“Senior vice president of sales. Youngest of the execs,” he beamed.

“That’s something to be very proud of,” she said, again, with total genuineness.

He was aglow, getting all warm and toasty inside as his ego expanded. “Yep.”

“So, how about your sales team? Do they work as hard as you do?”

Cam grunted. “I wish. But I pump ‘em pretty hard to get it all done.”

“I’ll bet you do, sugar. And they’d follow you through thick and thin, wouldn’t they?”

Uh-oh, I thought. Here it comes. I had a feeling that Cam’s balloon was about to go blammo.

Cam appeared to have divine intervention on his side because just then Mary Ellen stopped by to refill our drinks. She set her order pad on the table and whispered something in Agnes’s ear. Agnes nodded, and Mary Ellen scurried away, leaving her order pad behind.

“She,” said Agnes watching Mary Ellen, “is priceless. She helped me open this place and has been here ever since. Single mom, accomplished athlete, extraordinary businessperson. She runs the place now, but back when she was waiting tables, customers would wait in line just to get into her section. You know why?”

“I’ve seen faster, to tell the truth. In fact, sometimes she can be pretty slow turning tables over. So it’s not because she’s fast—but we were talking about you, weren’t we? Oh yes, thick and thin, right? So how about it, Cam?”

Cam pretended not to know what she was asking. “How about what?”

“I never said that.” He was starting to smolder, and I was tempted to order a basket of popcorn to munch on while the fireworks went off.

“But it’s true. I can tell by the way you’re avoiding the question, baby. And also because you have to—how did you say it—pump them pretty hard to get results. They do what you tell them to do because you’re the boss. They perform because they have to; not because they want to. In other words, Cam, you’re not a leader at all; you’re a taskmaster.”

Cam bristled in his seat. “Wait a minute. Hold on. I’m not sitting around and barking orders while I’m relaxing under a coconut tree or something. I’m slammin’ it harder than they are. I demand no more of them than what I demand of myself.”

“Wrong!” Agnes erupted. “Wrong, wrong, wrong!” She slapped her palm on the table.

Everything stopped and heads turned in the diner. I was stunned to hear such thunder emit from this sweet old lady. When Mary Ellen looked back at us over her shoulder and shook her head as if to say there she goes again, however, I got the impression that an occasional Agnes cloudburst was to be expected.

“I want you to tell me right now why you work as hard as you do,” she railed. “Tell me why you work those long hours, make all those calls, go to all those meetings, close all those loans. Tell me!”

Cam sat blown back in his seat with a startled expression on his face that I hadn’t yet seen or even thought he was capable of making. His mouth was moving, but it took a moment for him to get any words out.

“And you love it,” I said before I could stop myself. “You love the game, don’t you Cam?”