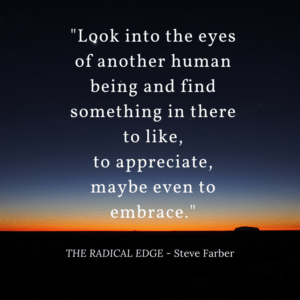 It’s funny how things work. As I look back on the trajectory of my own life, it seems to me that all the things I’ve done and all the people I’ve met have yielded lessons that have built on each other in increasingly meaningful ways. Some are convinced that the human experience is random and our time on this earth is not only infinitesimal but insignificant as well, the life’s-a-bitch-and-then-you-die school of thought.

I’m not much of a philosopher, so don’t ask me to argue the finer points of this age-old debate between meaning and meaninglessness, but it sure looks to me as though life serves up one lesson after another, and, just when I think I’ve got it nailed, got it all figured out, I come to realize that I am, in fact, an idiot.

I had told Rich Delacroix that I like everybody. Sure, I’d been exaggerating a tad, but, compared to most people it was true. It takes a lot for me to dislike someone. Really, it does. I’ve had plenty of conflict, argument, and misunderstanding in my life, and some relationships that had started well ended badly. I’ve had a failed business partnership and a failed marriage, so I know what it feels like when someone lets you down and vice versa. Still, my shit list is very, very short. In fact, I pride myself on my ability to look into the eyes of another human being and find something in there to like, to appreciate, maybe even to embrace. That, I believed, is what made me a good leadership coach.

On that day, however, sitting across from that gem of a woman in her marvelous little diner, I realized just how far it was I had to go. She was starting to get tough on Cam, but she never gave the slightest hint, the faintest inkling that she was just tolerating or putting up with him as a favor to someone else. She invested herself completely in this little bag of wind just as I, to my dismay, was good and ready to write him off. What does this say about me? I was asking myself as Agnes was asking Cam an oddly similar question. The cloudburst had passed just as suddenly as it had begun.

“Well,” she said, “let’s start with your direct reports, your sales managers.”

He poked his fork into a pickle. “Not a fair question. You’ll have to ask them.”

“All right, fair enough. But seeing as how they’re not here, what do you say they’d say about you?” Again, the warmhearted smile to contrast my increasing need for Zantac. And believe me, it wasn’t a food related need.

“They’d say I’m hard on them. They’d say I have no tolerance for laziness. Most of all, they’d say that I bring on the results.”

“And your peers would say?”

“Okay,” he fished his business card from his wallet and flicked it across the table. “Look at the title; that says it all, as far as I’m concerned.”

She left it there without giving it the slightest glance. “And your customers?” Agnes asked patiently.

“Your customers, Cam. Those people that bought you your car, what would they say about you?”

“How the hell am I supposed to know that? Listen, Agnes,” he crunched the end of the pickle skewered on his fork, “I get my customers a rate that they’re happy with and a program that’ll give me the highest possible fees and commissions without hurting them. I do it fast and I do it right and that’s the end of that. Everybody’s satisfied. What else is there to know?”

“Okay, then!” she exclaimed and pushed herself up from the booth. I was amazed at her height: around six feet—a good inch or two taller than I am. She stood steady as a rock and looked down at us with hands on her hips. “Don’t go away. I need to go talk with someone for a moment, but I’ll be right back. I’ll have Mary Ellen bring you some dessert, and when I return,” she stared down at Cam, “It’ll be your turn to listen to me. Got that, baby?”

She turned and was gone before Cam could respond.

“And Judge Judy retires to consider her verdict,” Cam smirked. He did that a lot.

“Listen, Cam,” I began. “I promised Rich that I’d spend the day with you, get to know you a bit, but I gotta tell you…”

Mary Ellen, again with impeccable timing, swooped by, cleared the platters, and set in the middle of the table a plate with an outrageous, ginormous piece of chocolate cake. It had an inch-thick layer of glistening icing with a swirl jutting from the top as if it were flipping the bird to Dr. Atkins. I picked up one of the two forks and sank it into the cake, helpless against the sweet siren song of the carbohydrates. “Oh, baby,” I said; momentarily forgetting that Cam even existed. “This is worth the trip.”

“You gotta tell me what?” Cam asked as he followed suit with his own fork.

grasped his wrist and motioned for him to stay.

“Look, Cam,” I breathed. “We really need to try to get through the day. As much as I hate to say it, we both stand to gain something from this, especially you.”

“Bluntly, Cam? Your job depends on it.”

“Is that a threat?” He fished for his cell. “Let’s just call Rich right now and that’ll be that.”

Again, I grabbed his wrist. “Not a good idea. Trust me on that. Let’s just give this thing another go, all right? I’m curious about what Agnes has to say, aren’t you?”

Cam’s wheels were turning and he looked a little shaken, as if he was beginning to realize that his situation might not be quite as rosy as he thought.

Then he did something that blew my mind right out its socket. It may very well have been the last thing I expected Cam to do at that moment.

He took out his WUP and began to write.