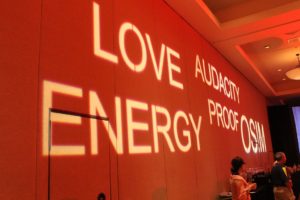 The German poet and novelist Johann Wolfgang von Goethe seemed to understand a thing or two about the importance of close relationships with like-minded people.

Consider this translated line from his Wilhelm Meister’s Apprenticeship, von Goethe’s novel about a businessman’s journey of self-realization: “The world is so empty if one thinks only of mountains, rivers and cities; but to know someone who thinks and feels with us, and who, though distant, is close to us in spirit, this makes the earth for us an inhabited garden.”

If only Herr Johann were alive today and could join us in San Diego for the Extreme Leadership Experience! Sure, he’d now be 268 years old, but I suspect he’d still enjoy a great time with great people. And imagine what we’d learn from such a … well … vintage … statesman.

He won’t be there, of course, but we will learn a great deal from each other – a great deal more, in fact, because it will be a gathering of diverse people who think and feel strongly about the same values. As von Goethe pointed out, that’s powerful stuff. Radical, you might say.

We put this event together partly as a little birthday present for myself. No, I’m not turning 268. Just 60. But somewhere during those six decades, I became convinced that the best way to really know someone is to spend time together. When we really know people—not just on a surface level—that’s where the most magical and impactful learning takes place. And those types of relationships provide strength even when, though distant, we’ve gone our separate ways. That’s the gift I want to receive and the gift I believe we can give each other over a couple of days in January.

This event will be part seminar, which means everyone will learn practical, applicable information about implementing or improving the tenets of Extreme Leadership. But it’s also part gathering and part celebration. Many of the attendees will be alumni of my training events, so they’ll learn from each other and provide master-level mentoring to those who are newer to the game.

We aren’t charging much for this shindig/workshop – just enough to cover our expenses. So, we hope to see you there.

Click this link for the details. Bring a friend. And we’ll all learn together as we make our little piece of the earth a little more like a garden.