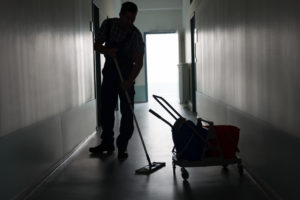 In 1994, Mary Miller and her husband, Tony, decided to grow their cleaning company. They hired a consultant to help show them the way. Two days later, the consultant fired them.

“I can’t help you,” he told Mary, the CEO of Cincinnati-based JANCOA Janitorial Services. “You’ve got a people problem: You don’t have enough of them.”

He pointed out that he was supposed to spend the previous night reviewing JANCOA’s systems and processes. Instead, he helped vacuum floors.

“That’s not what you hired me for,” he said. “Call me back when you get your people problem figured out.”

A little more than 20 years later, it’s safe to say they’ve done that.

JANCOA has grown from 65 employees to around 550. In an industry where employee turnover averages around 400 percent per year, JANCOA’s has dropped to under 100 percent–remarkably low for that line of work.

If results like those are possible with a janitorial company, they’re possible anywhere. It boils down to one big thing: They’ve learned that the key to employee retention isn’t the job itself, but in how effectively the company improves its people’s quality of life.

That includes helping employees dream bigger and accomplish their dreams, even when it means finding them a different job.

Caring about people more than profit

After their consultant fired them, the Millers took a hard look at why they couldn’t keep good people and realized that many of their employees had no reliable means of transportation. They bought a 15-passenger van and began shuttling employees to and from job sites.

Tony was the driver. And as it happens with most drivers, Tony became an invisible presence at the wheel with an ear to all of their employees’ problems.

He saw their living conditions and heard the stories of their financial and personal struggles–things that most employers never get a chance to witness.

“Something shifted in us,” Mary told me. “And it became less about what we can do to be more profitable and more about how we can improve our employees’ lives.”

Over the years, they’ve helped over 20 employees buy homes, sponsored literacy and language programs, and–as counter-intuitive as this may seem–actively helped team members identify their passions so they could find their dream jobs. Even if it meant changing direction in their line of work.

“Nobody dreams of being a janitor,” Mary said. “So we asked people to give us their best for three to five years. And we promised to improve their quality of life while they were here and to help them identify and find the job of their dreams–whether it was here or somewhere else.”

The Millers have learned that giving people the opportunity to pursue their dreams makes them happier in their current work, too–which means that the person pushing a broom is more energetic, complains less, does better work, and even helps build a self-sustaining culture.

Many people have stayed with the company (some for more than a decade) because they’ve come to enjoy what they do and appreciate what the company has done for them.

Some left and then came back because other companies just didn’t compare.

JANCOA has found that 57 percent of its employees have been recruited by other employees. Another 17 percent came because of the recommendation of former employees.

Finally, focusing on the lives of employees helps the business grow.

The company has doubled its revenues in the past four years, even though it doesn’t have a sales team. The word of mouth that helps fill their employee pipeline also helps sustain and grow their customer base.

“Our customers love that they don’t have different people cleaning in their building every night,” Mary said. “That’s a direct result of our employee retention. And when those people are working toward something and not just going through the motions, your efficiencies increase and so does your profitability.”

Whether you lead a team of janitors, accountants, coders, or salespeople, the primary leadership lesson, it seems, is this: