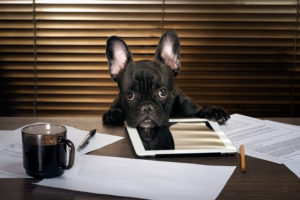 When you’re building a culture that matters, the mission matters. Researchers with Deloitte, for instance, found that “mission-driven” companies typically are first or second in their market segment, have 30 percent higher levels of innovation, and have 40 percent higher retention levels.

Neil Gill faced this challenge in 2015 when he took over as president and CEO of Dogtopia, which offers daycare, boarding, and spas to canines at more than 40 location across North America.

Dogtopia had been around since 2002, and it already had engaged and passionate franchisees, as well as systems that focused on the safety and well-being of the dogs. But it needed a brand reinvention that would reshape the experience for pet owners and pets alike. And it needed all of the franchisees and their team members to buy into and live a shared culture.

Gill didn’t know biscuits about the doggie daycare business, but he had a love of dogs and more than 30 years of experience in retail and franchising with companies like Pizza Hut and Gloria Jean’s Coffee. So he was just the leader to create a unique cultural personality–a non-traditional approach to the mission, vision and values that drive an organization.

Gill began, as you might expect, by engaging all the stakeholders–the support team, the franchisees, and the store members–to get their common viewpoints and beliefs about the company’s purpose. That sounds easy enough. Send out some surveys, right? But success came because he invested in more than mere surveys.

Here are three things he and his team did that you and your team can use to build or strengthen your unique cultural personality:

1. Roll in the mud with your new friends

One of Gill’s first new hires was an “emotionally intelligent” VP of operations. The two of them began running workshops for franchisees, leading webinars, and even working in the daycare playrooms.

“I hit the road in the first month,” Gill said. “I went to teams and said, ‘I’m here to learn. I’m new to the dog world. Teach me everything I can learn.'”

They spent time in person and on the phone with the people who ran their stores, and used their “Grow Dogtopia Grow” communications strategy to share and seek information each Friday afternoon.

Gill got to know the values and needs of the workers, the customers, and the business. So when he got the survey results, he had something important to go with them–first-hand insights.

2. Walk toward the barking dogs

Gill’s approach was new to some of the team members, and it created some resistance. That’s not uncommon. Even people who ask for a collaborative approach often meet it with suspicion, skepticism or downright cynicism.

“They aren’t used to it, so they think there’s an ulterior motive,” Gill said. “It takes time to build trust.”

So when Gill led workshops or worked in the stores, he typically spent at least two days there and found time to get to know people over dinner.

Sometimes the way through the resistance is to actually sit in the same room and eat food together, breathe the same oxygen, and allow people to see you as a human being.

Whether it’s a mission statement, values, or some other corporate manifesto, don’t become chained to business jargon. Unleash it in language that resonates with the people you’re asking to live it out each day.

Once you’ve invested the time to know them, know the business, and know what matters to your customers, share your key messages in words they’ll appreciate and remember.

Dogtopia has operating values around purpose, trust, accountability, enjoying the work, and displaying tenacity. But they share those values as five “Dogtopia-isms“–love life unconditionally like a dog, stay loyal to the pack, chase the absolute highest standards of safety, play to your full potential, and treat every day like it’s the most exciting day ever.

Those are not generic. They sound like they were written by Ellie, my 16-year-old golden retriever. They reflect the brand, the organization’s personality, what the people believe, how they work, and even what they provide for the dogs.

Every organization is unique and so is the cultural personality that brings its work to life. But every organization should be driven by a love for what it does – and if your fancy, schmancy corporate mantras don’t reflect the passion of that love, then you might as well be chasing your tail.