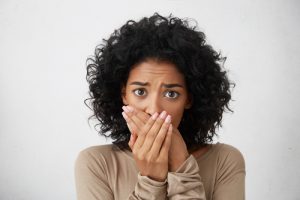 That voice telling you to be afraid could be one of the most effective leadership tools you have.

When’s the last time you were really afraid about something you’re doing at work? I mean the real, visceral kind of fear that wakes you up in the middle of the night and tosses and turns you.

Real leadership, the kind that changes lives and knocks down obstacles, is not something that magically happens on the day the word “leader” appears in your job description. Having a position of authority does not automatically make you a leader. Plenty of people who don’t wear the official title of supervisor, manager, or executive are, in fact, great leaders.

Leadership is the art of changing things. That means challenging the way things are now (the practice my mentors Jim Kouzes and Barry Posner call “Challenging The Process”). When you buck up against the status quo, it can be frightening, and you have to feel strongly enough to dare and to take other people out on that limb with you.

And that’s a scary proposition. As a leader, it’s your job to face that fear by being way out front where the danger is. Picture the famous painting that shows George Washington crossing the Delaware. He wasn’t in boat number three under a tarp eating a crumpet; he was out front, standing up, pointing the way.

Here are three things to know about claiming and using your fear with your team.

Let me ask you this: Don’t you attack a chore or a project with the greatest intensity right as you’re banging up against the drop-dead deadline? That’s because you are afraid you’re going to miss it.

Arash Javanbakht and Linda Saab, assistant professors of psychiatry at Wayne State University, wrote in the Smithsonian that feeling afraid “leads to bodily changes that prepare us to be more efficient in a danger.” Fear can be a motivator, an energizer, and a source of excitement and even exhilaration.

I often refer to this experience as the “oh s**t moment” (OS!M). Think of the OS!M as your best indicator that you’re actually leading. Why do I say that? Because the whole point of leadership is to take your people, your organization, and yourself to new heights. You can’t do that while sitting comfortably on an amusement park bench eating popcorn and watching all those idiots ride the Skull Crusher roller coaster. Get on the ride with them. See how that feels. Now we’re talking.

“Leadership by fear,” is where your employees actively worry about losing their jobs or being humiliated if they make a mistake. And it’s the polar opposite of what I mean. This is about your creating an environment where people know they will be supported when they try and possibly fail.

We as leaders are often taught that we should try to look fearless, calm, invincible, and perfect. Truth? There’s no such thing as a perfect human being, so when someone is working with a leader who appears that cool and collected, they’re automatically suspicious.

So own up to it. Tell your team about times you tried and didn’t quite reach your goal, and what you learned from it. Say to them openly: “We’re doing this, and it’s scary. But I’m ready to face that fear because I believe in you, and I believe we’ll succeed together.” That’s real. And that’s the road to having people believe in you right back.

3. Fear gives your team energy to do more, dream more.

Imagine channeling the energy, fear and excitement of the OS!M and transmitting it to everybody on your team. Imagine going out so far on a limb that you have to band together in the grand struggle to make your big idea work. It’s that feeling when you’re racing to put together a presentation right before the big trade show or client meeting; it’s the excitement when you’re scrambling to get a big order ready or a room set up in time for an event. You’ll rarely feel that close with your co-workers, and it’s far from the all-too-common Cubicle City doldrums characterized by disengaged drones and waiting for the clock to strike five.

So, in a few words: find the fear, face it, leverage it, and share it with the group. Now you’re living up to the title of “leader.”