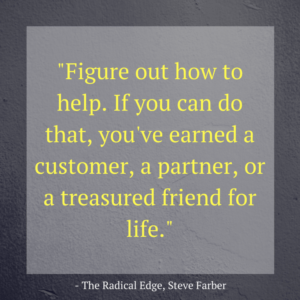 In retrospect, I should have seen it coming, and if I’d known what was going on back at ILGI at that very moment, I’d probably have patted Cam on the head and said goodbye right then and there.

It’s been called a lot of things throughout history: mutiny, uprising, revolt—insurgency is a popular one these days—but whatever colorful descriptor you choose, that’s what was
going down in the richly paneled office of Rich Delacroix.

He stood at the floor to ceiling window and looked down at the Mormon temple and at the highway beyond, wistfully picturing himself behind the wheel of his Mercedes Roadster. With the blue sky above and a V12 under the hood, he could rocket north toward San Francisco and soon be far away from the sudden, choking tension that had gathered in his office like a thunderhead. He could, that is, if it weren’t for those three irritating letters that followed his name on the door: CEO.

Rich turned to face the six sales managers who comprised the entire team of Cam’s direct reports. These were the folks responsible for the sales agents and Cam, in turn, was responsible for them, which, it should be obvious by now, was precisely the problem.

“There’s a rumor going around the floor,” she said, getting right down to business, “that  you’re  going  to put Cam back on the phones, and that he won’t be in management anymore, or something to that effect.”

Rich sighed. Few things are more disconcerting than a leak in the executive team. He was going to have to figure out where the fissure was, but he couldn’t think about that right now. Not with six pairs of eyebrows raised at him in anticipation. Neither confirm nor deny, Rich thought. He really hated politics but he also knew he had to handle this with more than a dollop of finesse. Whether they wanted him to or not, he certainly wasn’t going to preside over a kangaroo court. Yet, these managers and their sales agents were the best in the business and the backbone of his company, so he damn well better listen to what they had to say on the contentious subject of Mr. Cameron Summerfield, SVP.

“Okay,” said Rich. “Everybody have a seat and let’s talk this through.” They all sat on the sectional leather couches at the far end of the office and Rich continued.

“What have you heard, and what do you want to know?” “First of all, is it true? Is Cam being demoted?” asked Sergio Velasquez, a manager who had been at ILGI about six months longer than Cam. He had watched Cam come on board, catch fire, and scorch right past him on the corporate highway. The day Cam became big boss man was the worst day of Sergio’s professional life—not that he was one to hold a grudge or anything. “Because,” he went on without waiting for an answer, “we think it would be better if you fired him altogether.” Not that he held a grudge or anything.

“We?” exclaimed Lisa. “Speak for yourself, okay? That’s insane. Cam’s the best salesman any of us have ever seen. I’ll take him on my team, Rich, and we’ll kick your butt, Serge,” she challenged with a grin.

“Fine, take him,” said Sergio with a dismissive wave of his hand. “Just keep him and his smug, holier-than¯thou attitude the hell away from me and my guys.”

“Excuse me; may I say something?” said Rich with exaggerated calmness, a valiant attempt to overcome the pressure pulsating in his cranium. “What to do about Cam—if anything—is not your decision,” his eyes moved back and forth between Lisa and Sergio. “It’s mine. I do want to hear what you have to say, but the decision is ultimately mine and mine only. Everybody understand?”

Rich stared at Sergio with raised eyebrows. “Which is?” “If  you  make  the  wrong  decision,  you’ll  kill  this management team.”

Agnes sat up and smoothed her sweater. “Let’s start with the obvious: we’re all business people here, agreed? And can we all agree that we’d have no business without customers?”

“Okay; Business 101 completed, so let’s move on. You boys better finish that cake, this is the one school where eating in class is required.”

Agnes waved her hand. “I’m not going to rehash all the conventional customer service wisdom. If you don’t know those things by now, then there’s nothing I can do for you. Process is important; CRM technology, customer-focused strategies, complaint handling skills: all important. We can all get better at those things, to be sure. Right, sugar?”

“Yeah. I guess so, sure,” said Cam, but without his trademark flippancy.

“But,” she continued, “If you really want to stoke your business till it burns so bright that everyone will take notice, there are two things you must be with complete abandon.” She paused and looked expectantly at each of us. “You may want to write these down.”

That was obviously not just a friendly suggestion so I clicked the button on my pen.

“Hold on,” Cam said. “That doesn’t sound right. Don’t you mean two things we have to do?”

“I most certainly do not,” she replied firmly. “There are thousands of things to do, I’m not even going to pretend I know what they all are, but all those things will come from the two things to be. And they are,” she forged ahead, “One: be deeply fascinated by the life of every person— customer, employee, colleague—your business touches; and two: be deeply grateful for who they are and what they do.”

Cam squirmed but said nothing.

“Too flowery? Too girly? If there’s one thing you should have gathered about me by now, boys, it’s that I am certainly not made of sugar and molasses. I’ll kick your ass from here to Hialeah if I think it’ll help you, so don’t you ever accuse me of being fluffy.” She glared at Cam.

“I didn’t say anything,” he whined.

“Umm-hmm,” she looked at him askance. “It all starts with the heart, Cam. If you develop a sincere love for people, you’ll automatically be fascinated with and grateful for them. If you’re fascinated with them, you’ll discover how to add value to their lives. If you’re genuinely grateful for their patronage, partnership, or friendship, you’ll show them in ways that are sincere and meaningful. Those are the essential elements of a fabulously productive business relationship, or any relationship, for that matter.”

This was familiar territory for me. “Pops called it ‘do what you love in the service of people who love what you do.’”

She pointed to a small sign hanging on the wall behind the counter. I squinted at it, but the writing was too small for me to read.

“Pops and I kicked that around for years. He finally crafted the words just so, and it became his mantra. He taught it to anyone who cared enough to listen, which many did, of course, but there were only a few who really got it in their bones, you know? Edg has it, for example, and so does that lovely clown, Smitty. And maybe the both of you will, too.” She zeroed in on Cam. “Is this making sense to you?”

“Whatever you say,” he muttered.

“What?” I said, picking up his uneasiness with my refined sense of the obvious.

“This sounds like personal stuff, not business wisdom,” he oozed.

“Well, baby,” Agnes sighed, “contrary  to  what  the old school bureaucrats would have you think, business is a deeply personal endeavor. Whether you intend to or not, you put your stamp on every bit of work you do, and you leave an indelible impression on every customer and colleague you touch. Each one of those impressions speaks volumes of truth about who you are. Business is not a mask; it doesn’t hide your face. It unveils it, wrinkles, moles, warts, and all.”

“I don’t think so,” said Cam starting, again, to fidget in his seat. “Work is work; personal is personal. Who I am at home and what I do there is nobody’s business but my own.”

“I’m not saying you should shower with your team, Cam,” Agnes jabbed. “When you go to the bathroom, I’d much prefer that you close and lock the door, believe you me. Certainly, there are always lines of appropriateness, and each of us has to determine where to draw those lines. What is vital to understand, however, is that you can hide some of the things you do, but you can’t hide who you are. And you shouldn’t try to because your uniqueness is what sets you apart. I defy you to show me another Cam Summerfield anywhere on this planet.”

God forbid, I thought to myself behind the bathroom door, as it were.

“That old saying, it’s not personal; it’s business is just plain false. Business is personal, personal, personal,” she tapped three times on the linoleum tabletop for emphasis. “And,” she twinkled, “is there anything in the human experience more personal than love?”

I regarded that as a rhetorical question.

“Love is your leverage,” Agnes said. “And if you’re observant, if you stay fascinated and grateful, love will hand you your competitive advantage on a solid gold platter.” She rested her fingers on Cam’s Wake¯Up Pad. “This pad will only help you if you use it with your heart.”

“Okay,” huffed Cam. “Now we’re getting a little too, like, feel the force, Luke. It’s a notebook, Agnes, not a freakin’ light saber.”

“It’s not magic, baby. There is, in fact, nothing more real and practical than applying love to the work you do.”

“I have been,” she smiled, pointing to the front of the diner. “Since the minute you walked through those doors.”