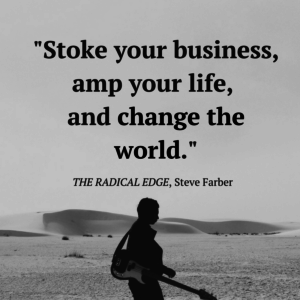 “You fascinate me, Cam,” Agnes cooed. “Excuse me?”

“You heard me, fascinate. That’s why I’ve been spending all this time with you. I love to discover things about people; and in that act of discovery I can oftentimes—not always, but often enough—figure out how to help. And if I can do that, I’ve earned a customer, a partner, or a treasured friend for life.”

She turned to me. “And as Cam and I have more time together, which I certainly hope we will, I’ll learn about him, about his life story, about the experiences that have made him what he is today. Doesn’t that sound like a great deal of fun, Steve? Do you see how rich and rewarding that will be?”

Now it was my turn to squirm.

“What am I,” said Cam with obvious discomfort, “a gorilla in the mist? What if I don’t want to, as we say here in California, share any of that with you?”

“That’s okay, sugar. I’ll still learn about you by trying, but if you shut me out, that’s your prerogative. Most people, though, will blossom under the attention. Let’s take your sales department, for example.”

“All right then,” she probed, “tell me one story about one accomplishment by one member of your team. Just one.”

“All right, I will,” he said trying to rise to her challenge. “Sue Proctor, a sales agent on this guy Sergio’s team. She blew her quota away last month, after two consecutive months of probation. I didn’t think she’d make it, but she did.”

“How’d she do it?” I asked, not exactly fascinated, I admit, but certainly interested.

“Bottom line? She made a lot more calls and put in a bunch more hours. I think she worked on Sundays, too.”

“Tell me what you know about her.”

“She’s been working at ILGI for two years; before that she was a headhunter at a local boutique placement firm.” “That’s not her story; that’s her résumé,” said Agnes.

“Look,” Cam’s voice rose slightly. “I don’t have the time or the desire to…”

“Time is not the problem, Cam,” Agnes cut in. “Desire is. You don’t have it. You’re not fascinated with Sue or, I’m guessing, anyone else in your department. True or false?”

Cam shook his head. “I’m deeply interested in their results, Agnes, that’s my job. Once the results stop, so do I. We all say so long and that’s that. Not everyone’s cut out for this business, and if they’re not, I’m not going to waste my time or the company’s money coddling them.”

“I agree with you, Cam, and I think Steve would, too.” I nodded.

“But that’s not the issue,” Agnes said, lowering her voice to an emphatic whisper. “The problem is when your superstars’ results suffer and they leave because of you— because they just can’t stand working with you any longer. Or, just as bad, when people who could be superstars are never given the chance to blossom, to experience their own potential.”

Harsh, but right on the money. That was the situation according to Rich, and it was precisely the reason he wanted me to work with Cam. I marveled at how Agnes was able to be so blunt without expressing the slightest hint of rancor. “You said earlier,” she rolled along without giving Cam a chance to react, “that your demands of yourself and your team are identical, but they’re not. You’re fascinated with yourself; you know what makes you tick, you know your own dreams, hopes, and aspirations and you do what it takes to achieve those things, right?”

Cam crossed his arms and sat back confidently. “Of course, I do.”

“And that’s why you’ve broken all the sales records.” He nodded. “Yes. I expect nothing less of myself.” “But getting others to break records is your job as a

leader. In order to do that, you need to focus on their needs—their desires for their lives—and then show them how their performance at work will bring those things to fruition. You obviously don’t, because you can’t tell me one meaningful thing about any one of them. That’s not only a lack of fascination on your part, baby; it’s out-and-out contempt.”

“Isn’t that a bit much, Agnes?” I asked, surprised to find myself momentarily in Cam’s corner. “That doesn’t feel like contempt to me.”

“I know what you mean, Agnes,” I said, and then turned to Cam. “Let me give you a perfect example of what she’s talking about.”

The best Extreme Leader that I’d met in my years of doing this work was a midlevel vice president at a formidable national bank. When I first met him, Dick was running the check processing operation in the bank’s corporate facility. It was the closest thing a bank has to a manufacturing operation and it had an ethnically diverse, primarily blue-collar employee base. Showing me around the facility, Dick beamed with pride and enthusiasm as he regaled me with story after story of unprecedented productivity increases and skyrocketing employee morale.

It occurred to me as we talked that Dick rarely used the pronoun, “I,” as in, “I’ve done this; I’ve accomplished that.” In fact, the word “we” didn’t come up that often either; instead, he told me story after story about individual people and how they’d risen to conquer one enormous challenge after another—and he told many of those stories with the hero standing right there. Some appeared embarrassed by the spotlight, but every one of them, without exception, expressed some variation of a glowing “thank you” before scurrying back to work.

It’s not as though Dick didn’t have an ego. He could puff out his chest along with the best of them, but he saved that for the appropriate time, usually after dinner and more than a few drinks, and always tempered his boasting with a good shot or two of self-deprecation. Moreover, he always brought it back to one central theme: his deep gratitude for his employees’ spunk, imagination, personalities, and drive. I remember getting the distinct impression that he was in awe of their accomplishments. In retrospect, I could see that he was, indeed—to use the word of the hour— fascinated with them.

Simply put, Dick loved the individuals on his team, even the ones he eventually had to let go.

Several years later, after his promotion to senior vice president—which was essentially deity status at the bank— surviving a merger, and moving to another division, Dick was charged with conducting what some euphemistically call a reduction in force. Over a 12-month period, he culled his division from 1,500 people down to 175, mostly through outsourcing. During that same period, however, employee satisfaction percentages went from the mid 70s to the high 80s, raising steadily all throughout the process. That was counterintuitive. And it wasn’t because the survivors were happy to still have a job—which they were— but anyone who’s ever been through a layoff will tell you that the event is usually characterized by increased stress, cynicism, and even paranoia. That was not the case in Dick’s domain.

When I asked him how he accounted for the amazing spirit and morale even as people were jetting out  the door, he said, “Two things: I kept everyone involved and I continued to let them know I cared, every freakin’ day.”

Although, to be fair, being the potty mouth that he was, Dick’s language was a bit earthier—a bit more colorful.

Maybe that’s part of the reason they loved him right back.