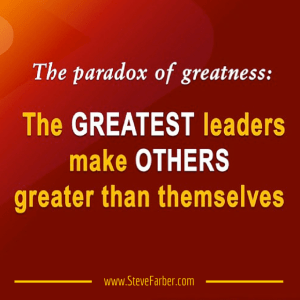 When my third book, Greater Than Yourself, was published in 2009, it seemed to many that the world was going to hell in the proverbial hand basket.

Wall Street had melted down, the market had crashed, and folks were losing their homes and getting laid off in the process.

Then I came along with a book that said, in essence, the surest way to success is to focus on helping others to be more successful than you.

For people in survival and self-preservation mode, that wasn’t an easy message to hear. It seemed counter-intuitive at best, flat-out ridiculous at worst.

Nonetheless, many people did listen. They did get it, and they began to take on GTY (Greater Than Yourself) Projects of their own by finding someone to boost up.

When faced with the deepest of personal threats and challenges, those visionary GTY leaders invested their time, love, wisdom, coaching, and connections in other people–and garnered great self-fulfillment in the process.

Six years after GTY’s publication, we still have plenty of challenges to go around, but–I’m gratified to say–people seem to be more receptive than ever to the Greater Than Yourself approach.

Maybe the book was a little ahead of the curve, but I believe that the act of raising others up to be even more successful than you are is an approach whose time has come.

This video will give you a quick overview of the idea:

What do you think?

Are you ready to take on a GTY Project of your own?