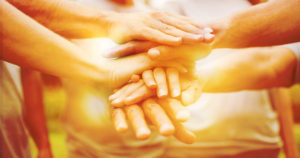 Singapore boasts the second-most competitive economy in the world, according to the World Economic Forum, so it’s no surprise that their people are highly driven. The first time I traveled there as a keynote speaker, however, I was encouraged to see that their competitiveness didn’t shut the door on what I call a Greater Than Yourself (GTY) mindset.

Simply put, the greatest leaders are the ones who make others greater than themselves. In many organizations around the world, that’s often seen as counter to self-preservation. And in Singapore, self-preservation seems pretty important. In fact, when asked how they see Singapore’s society, the top response by Singaporeans in 2015 was kiasu ­– which means “afraid to lose” – followed by competitive, materialistic, self-centered, and kiasi (afraid to die). Let’s face it, if you see the world in those ways, you might be a little apprehensive about promoting the success of anyone who isn’t, well … you.

But here’s the good news. That 2015 survey, which was conducted by aAdvantage (a Singapore-based consulting business) and the British-based Barrett Values Centre, also found that Singaporeans say their top personal values are family, responsibility, friendship, happiness, health, and caring. They apparently aren’t as fatalistic and selfish as they think they are.

So imagine their delight when I explained that GTY actually is the ultimate in self-preservation. In other words, you can practice GTY and not have to worry about losing, much less dying. In fact, practicing GTY makes you an even more indispensable leader within an organization because you develop a reputation for not only producing great results – but for producing other leaders who produce great results.

When I spoke to the Singapore Institute of Management, I found a group of leaders who were eager to practice GTY. It not only aligned with their personal values, but it also provided an avenue for reshaping the way so many of their peers see their society. It allowed them to remain competitive personally and as an economy while expressing their desire to help the people around them. Instead of leading like they are afraid to lose, it showed them how to play to win.