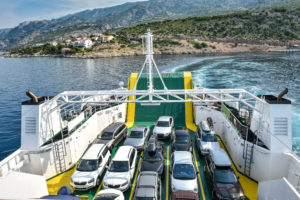 Imagine landing a new job in a new place  – a place that’s more than a thousand miles over water from where you’ve spent your entire life. You’re excited about the adventure. So you pack up everything youown, including your car, and have it shipped to your new home, eager to start your new life.

Now imagine seeing that dream – the American Dream – slip like sand through your fingers because someone you trusted didn’t deliver on a promise. Who do you turn to? What do you do? How do you rebound from the expense of relocating to a new place only to find that the job you were promised doesn’t exist?

That was the case for a customer of Trailer Bridge, the logistics company that specializes in shipping freight between Florida, Puerto Rico, and the Dominican Republic. Fortunately, in this case the customer was dealing with a company run by a culture of Love.

For Mitch Luciano, who has spent the last two years turning around Trailer Bridge’s culture and financial performance as the company’s president, the best thing about this story is that he was barely involved in it.

Mitch, a practitioner of The Radical Leap process, knew something powerful was happening in their culture because their employees didn’t seek the boss’ permission to do the right thing. They just did it.

“Our customer, who lived in Puerto Rico, had a phone interview with a potential employer in Orlando and was told he had the job,” Luciano said when he told me the story.

“He contracted with us to ship his car, and we charged him our standard fee for moving cars from Puerto Rico to the United States, and he paid the bill. But when he got to Orlando and showed up for work, they told him that the job was no longer available.”

Can you imagine? You’ve spent your last dime to ship yourself and your car to the mainland to take a new job and start a new life—and you’re told…what?

Distraught, he drove back to Jacksonville, and his mother met him there with just enough money for the two of them to go home.

But they didn’t have another $500 to ship his car back. too.

Feeling compassion for their customer, one of the Trailer Bridge employees asked Luciano if they could charge him half price to get his car home.

“Absolutely,” Luciano said. “Charge him half.”

The man was thankful for the offer, but he pointed out that half was the same as full price to someone with no money at all—he just didn’t have the cash.

So without consulting Luciano, the Trailer Bridge team made a decision to ship his car back to Puerto Rico for free.

“We’re not going to charge you anything,” Trailer Bridge told their customer. “You can pick up your car next Wednesday in Puerto Rico.”

The man was so grateful that he and his mother came to the Trailer Bridge corporate office and hugged everybody and anybody they could get their arms around.

“You have no idea how important it was to us,” he said. “If anybody ever asks me who should I use for shipping, I’m telling them every single time it’s Trailer Bridge.”

The man’s endorsement might lead to a few new customers, but, really, that had nothing to do with why the employees treated him that way. They did it because a culture of Love expresses itself with love toward its customers.

“Ultimately, what’s $500 to us?” Luciano said. “But it meant the world to this one individual. And who knows where he’ll be five years from now? Maybe he’ll be the director of transportation for some company in Puerto Rico, and he’ll use Trailer Bridge for everything. All we know for sure is that we had an impact on his life.”

Many leaders resist the idea of incorporating “love” into their business model, but Luciano knows the power it brings – both to the culture of his organization and in the impact it has on customers and the community.

Look at what happened: They created a culture where every day they experience the importance of helping each other. Then they had a customer who was in dire straits. It was obvious to the team that they needed to get his car back to Puerto Rico, because he couldn’t afford to ship it himself. They not only knew the right thing to do, but they felt confident they could do the right thing without fear of retribution from above.

They learned that when Extreme Leaders take a Radical Leap, good things happen – for themselves and for their customers.

And that’s why love is just damned good business—for Trailer Bridge and the rest of us.