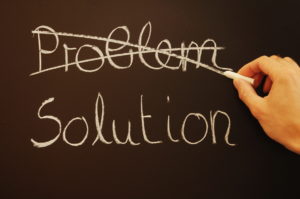 Johnny Mercer and The Pied Pipers first recorded the song “Ac-Cent-Tchu-Ate the Positive” in 1944, and many stars have covered the tune–Bing Crosby, Ella Fitzgerald, Paul McCartney, Barry Manilow, and, for you punk fans, The Vindictives, just to name a few. But for David Corbin, it was a version by a dancing bear that stood out.

Corbin, a friend I’ve grown to respect as a fellow professional speaker and mentor of mentors, was watching the video with his daughter. The dancing bear was happily advising his audience to accentuate the positive and eliminate the negative. It’s the power of positive thinking set to music, right?

But it dawned on Corbin that his most productive and profitable clients don’t eliminate the negative–they illuminate the negative. The next thing you know, Corbin had written a best-selling book about this idea.

“I reverse engineered a lot of the work I’d done with clients,” Corbin told me. “I found that the people who were really productive were the ones who were willing to take a look at the issues, the challenges, the problems, and the conundrums.”

Corbin’s diverse background in psychotherapy, sales, and consulting, not to mention his quest to lose weight and live a healthy lifestyle, all helped him create a simple formula: Face It. Follow It. Fix it.

Here’s a quick overview of what I learned during a recent conversation with him about uncovering and fixing organizational problems:

When Corbin was 50 pounds overweight, he worked hard to avoid mirrors. No need to look at the problem, right? But facing the negative begins with an honest inventory.

He challenges us to stop and look at our business reflection too. And then answer these questions with brutal honesty:

This type of audit often requires feedback from others–a 360 review is helpful–but it begins with a look in the mirror.

Crime dramas have always been popular on television, because we all like to play the role of the detective, follow the clues, and figure out who-done-it. It’s much more fun to do that when it involves someone else, however, than when our own mess is the scene of the crime. But Corbin suggests that we can’t address our negatives without sleuthing the root issues.

Ask yourself these questions–again, with unrelenting truthfulness:

That last question, I’ve found, can be extremely motivating. Envision your life 5 years from now, for instance, if you continue eating pizza three times a week (or day). Not a pretty picture for your family holiday newsletter.

Now project the future state of your business if you continue to live with high employee turnover, or shrinking market share.

In the first case you grow fat, and in the other you go broke. Neither is healthy.

This isn’t necessarily a third step, because the solution to any problem actually begins when you face it and follow it. “Daylight is the greatest disinfectant,” Corbin told me. “So the fix begins when you take the problem out from under the carpet and put it into the daylight.”

Too many managers and leaders don’t want to hear about a problem unless you’re also bringing a solution. That line of thinking discourages people from pointing out problems. If someone smells smoke, you don’t want them to wait until they have a fire extinguisher to tell you there might be a fire ablaze.

Even when there’s no immediate remedy, putting the problem out in the light encourages engagement and ultimately prompts action toward a solution. And in my experience, it’s always better for employees to openly talk about the problems they face than to privately whine about them.

Corbin is a fan of the late, great novelist and playwright James Baldwin, who summed up Corbin’s mantra this way: “Not everything that is faced can be changed, but nothing can be changed until it is faced.”

I totally agree, because we can never fully accentuate the positive or eliminate the negative if we’re sitting alone in the dark.