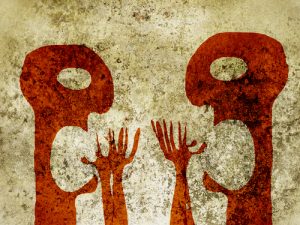 If there’s ever been a time with such a politically and socially polarized mood among Americans, it wasn’t in my lifetime, and I wouldn’t want to go back there. It’s gotten to the point where people are “de-Friending” their closest relatives, friends, and co-workers on social media, and friendly clubs and book groups are setting ground rules about what things can’t be talked about on their online forums.

It’s an urgent question in the workplace, too: What if people have a fundamental disagreement with you on something you really care about? Do you walk on eggshells, afraid the hot issue will be brought up and you’ll be forced to start a fight with that person? Or do you pick away at them, determined to convince them you’re right?

It makes for more tension in an already tense world, and more negativity at work, where people need to collaborate and get along to do their best.

Let me suggest a completely different approach: stop, remember that we’re all human, and open your ears instead of your mouth. You do not need to get people to agree with you about politics, social issues, or cultural beliefs. You don’t need to agree with them. All you do need to do is see one another as valued colleagues. As a leadership coach, you do need to help all your colleagues and associates feel they have, if not your agreement, your respect.

It’s so important to listen that it can literally poison the environment if people don’t. Not to stretch that “poison” idea, but the Harvard School of Public Health put out an article giving listening guidelines for people working in environmental health and safety. It stands to reason that if respectful listening is important in an office setting, it’s completely, frighteningly important in a field where failing to communicate can hurt someone or worse. If effective listening could keep the wrong weed killer from getting into the air somewhere, that’s a fantastic outcome. In your own work life, it could help keep misunderstandings or prejudices from poisoning the atmosphere where you work, and that’s important, too.

In other words, stop, look, and listen. Stop multitasking on your devices when the person is talking. Look at the whole person, embracing their humanity, the culture they come from—which may not speak or react in the same way as you, so you have to be ready to learn and adjust—and really listen to all of what they are expressing.

It’s amazingly rare that people are purely evil. It’s amazingly common that they have life circumstances, experiences, education levels, cultural backgrounds, and, yes, opinions that are just different from yours. Do you want to be a leader? Then take the lead in honoring each and every person you work with. Take the lead in really hearing what they have to say, and respecting it. There’s no doubt that others are watching and learning from you, so, as they say: Be the change you want to see.