My earlier, cryptic announcement about the diminishing availability of The Radical Leap and The Radical Edge perked a little excitement among some folks and caused some consternation with others.

I take both reactions as a compliment–so, thank you to all.

Leap and Edge aren’t going away, though–not by a long shot.

I’m over-the-moon to announce that this October will mark the publication of The Radical Leap Re-Energized. You won’t find it anywhere yet. Not even on Amazon. So, if you’d like us to notify you when it comes available, please let me know through the contact section on this site or in the comments below.

I’ll give you more details later; for now, here’s my intro from the new book. I think it’ll fill in a few of the blanks: 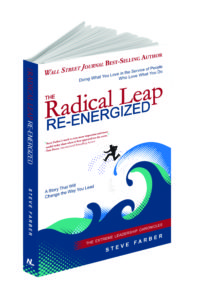 The Radical Leap Re-Energized: Doing What You Love in the Service of People Who Love What You Do

I’ve always considered myself to be a business guy.

Having started out as an entrepreneur in my late 20’s to early 30’s, I’ve worked for the last two decades in leadership development in the corporate world.  I spent 6 years as Vice President of The Tom Peters Company, whose founder and namesake is arguably the most influential “management guru” of our time.  In addition to Tom, I count among my mentors Jim Kouzes and Barry Posner, co-creators of the legendary Leadership Challenge books and the phenomenal research behind them.  The business world has been my laboratory, my university, my playground and a major part of my personal, social fabric.  I’ve had exposure to or worked with just about every kind of business and industry you can imagine.

So, when the first version of this book was published in 2004 under the title, The Radical Leap: A Personal Lesson in Extreme Leadership, I was proud to see it featured as a Reader’s Choice Award winner in Fast Company Magazine and displayed in the management sections of retail and airport bookstores around the country.  And then in 2009, when it was listed in Covert and Sattersten’s The 100 Best Business Books of All Time—right next to Tom’s In Search of Excellence and Jim and Barry’s The Leadership Challenge—well, to say that blew my mind would rank among the 100 Biggest Understatements of All Time.

I’ve been deeply gratified and, to be honest, more than a little surprised by the business world’s warm reception to Leap.

But the biggest surprises have had little to do with business, per se.

Over the short years since Leap’s first publication, I’ve heard from principals, schoolteachers and students; pastors, rabbis and clergy people of all stripes; bloggers and social media mavens; volunteer workers and non-profit missionaries, who’ve reached out to me to say that the ideas and inspiration in this book have helped them excel as leaders and succeed in changing their pieces of the world for the better.  And several of these people—I’m grateful to say—I now count among my dearest friends.

In other words, it turns out that The Radical Leap wasn’t just a “business book,” after all.

The Radical Leap Re-Energized represents a re-launch and a re-commitment to a universal set of life-changing/world-changing ideas.   This new incarnation is actually two books, The Radical Leap and The Radical Edge, woven together into a new, expanded and rejuvenated work.  Even though I originally wrote it in two separate endeavors, this full story is, in retrospect, the way it was always meant to be.

I didn’t make these ideas up—I think you’ll find that they’re timeless and universal—but I did make up the story surrounding them.

This book is a novel—a parable, so to speak.  I’ve taken broad, creative license with the story and the characters in it in order to create an entertaining delivery system for ideas and practices that are anything but fictional.

Part One: The Radical Leap offers a foundation, an operating system, for Extreme Leadership, and Part Two: The Radical Edge, takes it deeper with some significant personal applications and calls to action.

This book will take you a few hours to read and a lifetime to practice.  If you do, my hope is that you’ll strive to do what you love in the service of people who love what you do; that you’ll become the walking, talking, living, breathing example of Extreme Leadership in action.

That, I believe, is how individually and collectively we’re going to have a real shot at changing the world for the better, in business and beyond.