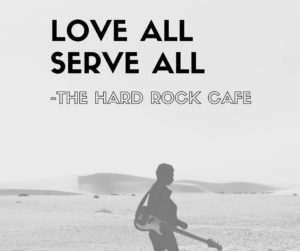 [Note: I’m excited to share my second book, The Radical Edge, in serial fashion here on SteveFarber.com! We’ll post one installment a week until the very end of the book. If you ever get impatient and want to scarf the whole thing down at once, you can always just pop over to Amazon and satiate yourself. Here comes the first bite. Enjoy!]

In the years since my first book, The Radical Leap, was first published, I’ve heard from countless business people about the importance of LEAP (cultivate Love, generate Energy, inspire Audacity, and provide Proof) in their own endeavors at work. I’ve met many of these folks and have seen the awesome things they’re doing—and attempting to do—to make their colleagues’, employees’, and customers’ lives more meaningful by applying the practices of Extreme Leadership.

And that’s unbelievably gratifying, to be sure.

But here’s what’s really blown my mind: I’ve also heard from students struggling with who they want to be and what they want to do, graduates nervously embarking on fledgling careers, clergy inspiring their congregations, and teachers tackling the sticky challenges of education. They were not—as we say in business—my “target market”; yet, LEAP has given each of them a good dose of inspiration and a road map to change their lives for the better.

Now that’s what gets me out of bed in the morning.

The Radical Edge is also a story—a parable, if you will—about Extreme Leadership. Yes, it’s for business people, and, yes, it’s for anyone else, too. Wherever you are in your life, and whatever position you may hold (or aspire to hold) at work, I believe the principles in these pages will stoke your fires, amp your volume, and help you change your world—whatever that world may be.

The characters you are about to meet represent people (or combinations of people) who’ve inspired me over the years. The same goes for the places and events. In other words, I’ve jumbled the made–up stuff with the “real” to the point that I’m not even sure where the facts end and the fiction begins. But that’s what made writing it so much fun.

The important thing, though, is that the ideas, principles, and actions are as real as it gets. You’re about to take a journey into the elements of personal and professional transformation. May it bring you higher levels of business success, deepened personal clarity, and a greater ability to shape your world.

May it bring you to The Radical Edge.

I was stuck deep in the wilds of Michigan, in the middle of winter, on the back end of a raging snowstorm that had left the countryside covered in—what do poets like to call it?—“a downy soft blanket of white.” That sounds much nicer than “a blinding, frozen wasteland,” which is a much more accurate image. I wasn’t exactly stranded out on the tundra, however, I was holed up in a toasty conference room inside a quaint but efficient bed and breakfast built for the burgeoning corporate off-site market. Moreover, I wasn’t alone because I was facilitating an executive retreat for, and I mean this in the nicest way, a roomful of middle-aged, white guys named “Jim.”

Blatant gender and ethnic homogeneity aside, this was a group of very intelligent, dependable and steadfast mid to senior level managers of a large Cedar Rapids-based manufacturing company, and I was an experienced and newly re-energized leadership consultant on a mission. The group was thrashing around trying to come to terms with a question that I had just dropped on them like a sack of salt on the roadway. It wasn’t the kind of question that they teach in facilitator school—such as, for example, “Who would like to volunteer to jump out of a tree?”— but a question that demanded the group look at their role and their company’s role from an entirely different perspective. A question that required a very deep level of thought and reflection as well as a steroidal dose of intellectual and moral courage, and that reflected my new perspective on the nature of meaningful life and work in the 21st century:

“How are we going to change the world?”

Apparently, it was a question that invited the inner cynic frothing with spittle and ablaze with venom to emerge, as well.

“Are you kidding me? What kind of question is that?” raged Jim.

“Ummm, a really important one?” I offered.

“How is that supposed to help me with my ridiculous workload, Steve? I mean, c’mon.”

“Look,” said another Jim. “I think it’s a good question. I think we should be willing to consider it at least. It’ll make for a good discussion, anyway.” Several Jims nodded in support.

“Hold on,” said Cynical Jim. “I don’t think this is just about having a discussion.” He looked at me. “I’m assuming that you don’t want us to just talk about how we’re going to change the world, you want us to do it. Am I right?”

“One question for you, then, Steve.”

“Assuming that we spend the time on this instead of the other really important questions that we need to address at this meeting, and assuming that we actually come up with an answer—”

“Okay, then here’s the question I’ll want answered: What, exactly, does a person like me need to do to make it all happen?”

“You mean what do you personally have to do to change the world?”

“As long as we’re asking the deep questions, yeah.”

“And another thing,” said another Jim. “We do have a business to run here. Are we just supposed to forget about that while we’re out changing the world?”

“Yeah,” said yet another, “not to mention having something resembling a personal life in our spare time.”

I paused. I looked out the window. I looked back at Jim. I opened my mouth. I closed it again. These were damned good questions.

I wished I had the answers.