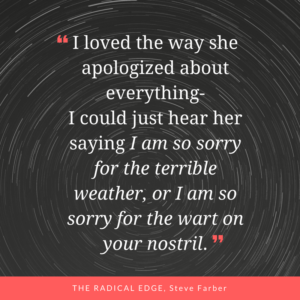 Just then, the door flew open and banged against the wall behind where Raul was sitting. We all jumped in our seats as a large, matronly-looking woman with bright red hair and a billowing, flowered summer dress heaved into the room as if she’d broken the offensive line and was making for the quarterback.

“Yow! I am so sorry, folks,” she huffed. “That damn door always does that and I don’t never seem to learn. I am so sorry I’m late but we had a little incident on the rail. Some little guy was grindin’ a rail from the top of the stairs and did himself a little straddle ride, if you get the picture. He won’t be singing baritone for a while, if you know what I mean.”

She walked around the table, came directly over to me, and thrust out a meaty hand.

“I’m Carolina Jones,” she bellowed. “I own this place and glad to say so, liability insurance and all!”

I laughed and gladly took her hand in mine; I liked her immediately.

“I am so sorry to interrupt the festivities.”

“But, I have to steal Mr. Farber here for just a sec or two.”

“No, no! I am so sorry to have concerned you. It’s nothing like that but,” she clamped her hand around my elbow and leaned in close to my ear, “I do have to borrow you.”

She all but yanked me to my feet and I bleated, “be right back,” to the folks as she hustled me out the door.

“Don’t know if he’ll be back today or not, actually,” she called over her shoulder. “I am so sorry about this, folks.”

This time she didn’t sound like she’d meant it.

“What’s going on?” I pleaded as she ushered me toward the archway leading out to the ramps.

We stepped out onto the lot and she pointed to the top of the half-pipe. Just as I looked up I saw someone execute a  perfect handplant, pausing for a brief moment with feet and board in the air before arching around, landing his board back on the ramp and skating back down into the U and up the other side. A helmet and pads hid the skater well, but I could still tell that he was no kid. Oddly, something about him looked familiar. I watched him repeat the same stunt over and over, perfecting the move a little more on each pass.

“I opened this place about three years ago,” said Carolina. “I wanted our kids to have a safe place to skate. A place where they could help each other learn all the fine skills and characteristics that a great skater needs without worry about the, well, seedier elements of the streets. I watch out for them, try to keep them from hurting themselves too much, and fix them up when they do. Some of these kids have broken families, some are pretty well off, but when they’re here, I’m the mama.”

“Very cool,” I said, watching the guy on the ramp. “But obviously it’s not just kids that come here.”

“No, it’s not just kids.” She put her fingers to her lips and whistled like a pro. “He’s no kid, but he’s an important part of the spirit of this place.”

The skater looked our way and came to a stop by sliding on his knees to the bottom of the U. He kicked up his board, grabbed it in his hand, and set it down on the asphalt as he walked toward us. When he pulled off his helmet, I saw him clearly and realized with a start why he looked so familiar. He broke into a run, thumped into me with arms wide open, and clasped them around me in a great bear hug.

“Dude!” he shouted into my left ear. “It’s awesome to see you! Really, really awesome!”

We pushed back from each other and I caught my breath.

He looked as fit and lively as the last time I’d seen him, two years earlier. His goatee showed a little more salt in the pepper, and his hair was cropped to Marine length, a good look for him. His requisite Hawaiian shirt was patterned with large, colorful blooms and his baggy, khaki pants billowed out from a waist even slimmer than I remembered.

“Had a little business to take care of, so I thought I’d come over to the mainland and do it in the flesh—give myself a chance to reconnect with some old buds.”

“I just wanted to see the look on your face, Steve,” laughed Carolina. “And it was worth it, I must say! I thought I was gonna have to practice my CPR on you. I’ll leave you two to catch up. I need to at least make an appearance at that meeting I’m supposed to be hosting.” She waved and thundered back into the building.

Edg looked toward the parking lot. “You still have that Mustang of yours?”

“Well, then,” he raised his eyebrows like the rascal that he was. “Let’s blow this boneyard. We’ve got a lot to talk about, don’t we?”

Yeah, we did, but that would have to wait. There was something I had to take care of first.

Rich Delacroix greeted me in the ILGI reception area, and we walked back to his office in silence. He said something to his assistant, followed me into his office, and shut the door behind us. He perched himself on the edge of his large, slate desktop and I stood facing him with my hands in my pockets.

“I want you to know, Rich, that I really tried,” I began without his asking me to. “I spent the day with Cam, even introduced him to some pretty sharp folks who all—out of the goodness of their hearts, mind you—were more than willing to share their knowledge with him. Just to help him out, you know?”

He nodded, so I pressed on.

“I don’t want to say anything inappropriate, and I don’t want to put this all on Cam, so let’s just say that he and I just don’t click. I have to admit that I was a little disappointed with myself, but, hey, it is what it is, and I’m clearly not the guy to work with him…”

The words ran out.

“I hope you understand, Rich.”

“It’s already happened,” he said and pressed a button on his phone. “Ask her to come in now, please,” he said into the speaker.

Spunky was the first word that popped into my brain when I saw her. She wore a navy dress suit and carried a black leather-covered notebook, which added to her sharp, professional mien.

“I’m Lisa Appleman,” she said, not waiting for an introduction.

We shook hands, and I must have cocked my head, or knitted my brow, or done something to indicate that I didn’t comprehend because she quickly followed up with,

Rich and I looked at each other.

“Do you want to tell me about it?” I asked, hoping that he would.

“He wasn’t fired,” said Lisa in a compassionate voice that took me by surprise.

“And I didn’t exactly demote him, either,” added Rich.

“What do you mean, exactly?” I said. “Seems to me that you either did or you didn’t.”

“What I mean,” Rich started to explain, “is that I didn’t demote Cam.”

I shook my head. “Not following you.”

“Cam came in early this morning and said he’d been thinking all night after spending the day, and apparently part of the evening, with you and your friends, he called them.”

I did not want to rehash last night’s discussion, so I kept quiet, for once.

“He said he realized that managing other people wasn’t for him, at least for right now, and that he’d much rather just get back on the phones and sell. He was itching to break his own personal best sales records. He offered to relinquish his title immediately and asked if I’d let him keep his office so he could work without distraction and burn it up. So, what could I say? He gave us all the perfect solution, because—I’ll be honest with you, Steve— that’s exactly what I was going to offer him. Well, that or a severance package.”

“Much better this way, though, isn’t it?” I couldn’t fight back a smile.

“Much,” said Lisa. “He’s on my team; I can’t wait to see what he does. I’m going to do everything I can to support him.”

Now, that’s what I’m talkin’ about, I thought. “Well, Lisa, if you ever need any help with him…” I began.

“Well… I may want another crack at him, is all.”

Yeah, I thought. So will I.