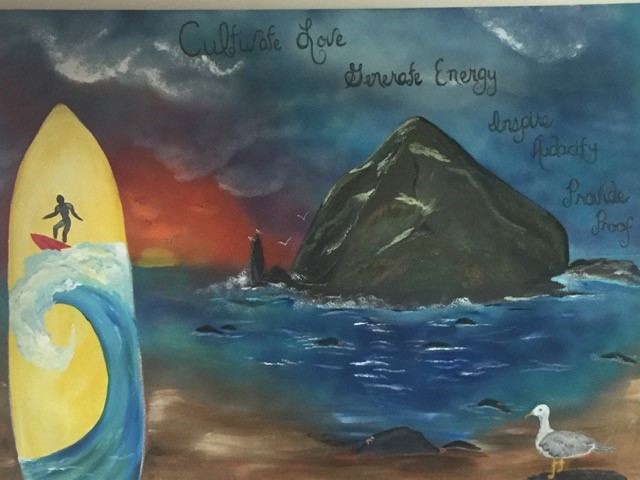 For many people, that brings to mind images of elderly men and women sitting alone in wheelchairs and watching televisions turned up to full volume while staff members stand around the water cooler ignoring buzzers and lights and complaining about their long hours and low pay.

Gateway Care and Retirement Center in Oregon not only counters that stereotype, it blows it to smithereens.

While patient care has always been good at Gateway, it hasn’t always been a wonderful place to work. As one of the nurses who has been there nearly a decade recalls, there was a time not long ago when “there was a lot of gossip and tension between staff members” and “supervisors were distant and preferred to have the lower level staff do most of the work.” Overall, it was a good place to work, she says, but working there was “not so fun.”

And what about James, the captain of their ship?

“Staff found him at times intimidating and some said he was not approachable,” the nurse remembers. “Many stated they felt he really didn’t know them and some felt he just didn’t care. I always felt he cared but was so busy trying to do a good job that he forgot to look up and really see people.”

In the last two years, however, employee turnover at Gateway has dropped by 25 percent per year, productivity has soared, and James not only gets high marks from his current team, but has found it easier and easier to recruit top talent to a culture that’s come alive.

That difference, James says, is that the facility now runs on LEAP—Love, Energy, Audacity, and Proof. James went through our Extreme Leadership Certification and says it completely changed the way he leads at work. He has incorporated LEAP into everything they do at Gateway—from his relationship with his team, to recruiting, to the care for their residents.

Talking about values like “Cultivate Love” at work is one thing, but living them out is another.

“This is one of the most challenging things that you will ever implement, because you have to do what you say you’ll do,” James says. “You have to prove it to others.”

But when you live it, James discovered, others enthusiastically live it with you. In fact, not long ago he asked people to submit nominations to recognize employees who represent the Extreme Leadership qualities of Cultivating Love, Generating Energy, Inspiring Audacity, and Providing Proof.

At the awards ceremony, there wasn’t a dry eye in the house.

“You could look around and see all the audacity that we had in the room, all of the energy that we had, and literally every single aspect of proof,” he says, “We live this and we breathe this on a daily basis now.”

One of his resident care managers even painted a 6-foot by 8-foot mural (pictured above) that’s a play off the back cover of my book, The Radical Leap. It hangs in the employee breakroom, but a second mural now hangs in James’ office, a gift from employees. Both serve as discussion points when James takes job candidates on a tour of the facility. But it’s not just something new hires see in the painting—it’s something they feel in the air.

That same nurse who described a not-so-cheerful scenario of the old work culture now says there’s less arguing and more teamwork throughout the building. The mindset is totally different.

“Mistakes are teaching opportunities, and conflicts are opportunities to build better relationships,” she says. “I want to come to work even when I know it’s going to be a tough day, because I love my coworkers and my supervisors. I have never worked in a facility (22 years of nursing) where I felt the connection I do with my supervisors, where I felt the team work together to make everything work and to back each other up.”

Another employee points out that she worked on a team that wasn’t “cohesive,” where they seldom worked together, and where their clinical outcomes were “1 star.” Now they socialize as a team, help each other without being asked, and take ownership of their work.

“The energy and love could really be felt and it was infectious,” she says. “The proof is in our clinical outcomes, which came up to a 2-star, then 3-star, then 4-star rating, and now we are 5 star and maintaining. These outcomes are proof that the love and support filters down to happier staff, happier residents, better outcomes.”