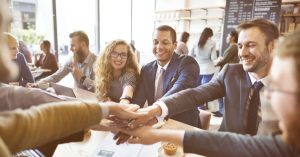 People respect you. But do they trust you—and should they? That’s the question anyone should be asking, but especially those of us who are mentoring others in a quest to build future leaders. So ask yourself this question: What did you do today to deserve the trust of others?

In these interesting times, there’s no big surprise that someone–the 2018 Edelman Trust Barometer–is surveying Americans to find out what people and institutions they trust. Are there any? Surprisingly, yes.

The good news is, almost three-fourths of Americans do trust their employers to do the right thing. Even better, nearly 70 percent believe that building trust is a CEO’s number one responsibility, even ahead of creating good products and services. So, even if you’re not the CEO (yet), that’s good to know: your people want to believe in you. They want to feel you are credible.

As a mentor of others, what I like to refer to as a Creator of Masters, you are–in large part–putting yourself in the mentoring role out of your belief in your own credibility. And, likewise, when you start working as a mentor, the least you should be able to expect is that the person you’re working with views you as a credible source of information. If you weren’t, they wouldn’t want to sign on as your protégé, would they?

So let’s explore that idea, credibility, and how it’s absolutely essential not to take someone’s trust in you for granted. As my own mentor, Jim Kouzes, once pointed out to me, the term “credible” comes from the Latin credibilis, which means “to believe.” It’s also the source of the word “credo,” or “statement of belief.” In fact, Kouzes and Posner wrote an excellent book called Credibility: How Leaders Gain and Lose It, Why People Demand It on the subject. Here are five ways to make yours grow.

Water the things you want to grow.

The important thing about that little walk through the dictionary is that we are talking about belief, not fact. You can’t force someone to believe something; you can only prove yourself until their belief happens. So I don’t ever want to just assume that somebody trusts me, and I certainly won’t make their confirmation of trust in me a prerequisite for helping them.

Credibility doesn’t just happen; you build it day by day. It’s not like paying a bill and filing it away. It’s more like tending a garden. You can’t do it a couple of times and call it done; it’s a continuing process. What do I mean by “tending”? I mean that you create, build on, and maintain trust in your leadership and ability to rely on your word.

Give them the opportunity to ask questions, ask for what they need, and question your actions. Be accessible to everyone, and curb your defensiveness. If people felt seen and listened to, they will start to trust that you care about them as individuals. Be the change you want to see in the company.

Even if your business as a whole has not been the best at earning employees’ trust, you as an individual leader can be rock solid in keeping your word and prioritizing honest communication. One person can make a difference. Go out there and prove that.

Give even the beginning staffer the opportunity to show that you can trust them, too. If you want a company culture built on credibility, help other people get into situations where they have to prove that you can believe in what they say.

Be transparent enough that people can easily do a “credit check” on your track record. Let people see that you are following through on what you promised to do (or pay, or promote).

If a situation arises that doesn’t lead to trust–let’s say you had a program in the works and the budget won’t accommodate everything you hoped for–start repairing the damage immediately and visibly. Talk about it; don’t obfuscate and don’t avoid the issue. Nothing builds trust as much as a person who admits when he or she is wrong and apologizes sincerely.

Don’t expect them to do everything you suggest perfectly or trust completely right away. The ability to wait with expectation but not impatience is to lead by example, and a hallmark of a great leader they will learn to trust.

This article originally appeared on Inc.com.