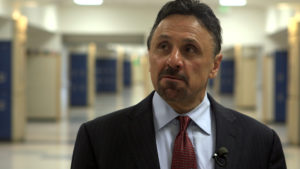 Even the most optimistic leaders among us are reminded almost daily that we live in a mixed up, messed up world. Indeed, that’s why Extreme Leadership is so vital–in our work, with our families, and in our communities.

Frank DeAngelis is one of those leaders who reminds us our strength is not displayed by achieving great things in a perfect world, but by our resiliency in a world that brings storms. His leadership tempest was one of the worst imaginable–a mass shooting on April 20, 1999 at Columbine High School in Colorado that left 13 dead and a community devastated.

As the school’s principal, DeAngelis was further rocked when he learned the shooters were students — young people who were supposed to be under his care had killed 12 of their classmates and a teacher.

“Talk about needing leadership skills,” he told me. “That’s something you don’t read in a textbook. You’re never prepared for that. It’s something that I had to live with.”

In business, thankfully, our storms aren’t usually deadly, but they are real–an economic downturn, a natural disaster that wipes out the key ingredient in our product, a loss of key talent, a game-changing innovation by a competitor, a fake news story that goes viral and damages our reputation …

Our response in those storms defines our leadership.

It’s been 18 years since the shooting at Columbine, and DeAngelis retired as principal in 2014. But his legacy — the lives he touched by staying at the school for the healing and rebuilding — includes some powerful lessons on leadership resiliency. He shares them often when he speaks around the country, and here are three I believe can help any leader through even the worst that the world throws at us:

It’s hard to describe the culture DeAngelis created at Columbine in the years following the shooting, but walking those halls, as I did before he retired, you could feel the love that came only through real relationships. That came from treating people the way they want to be treated.

“It’s not rocket science,” DeAngelis says. “I’ve seen young kids that come in and they think they know everything. There are no relationships developed with those kids. It’s about loving. It’s about relationships.”

The “Today is Today” Mindset

At one point, DeAngelis had been in six automobile accidents in the month of April. He wasn’t texting or talking on the phone. He was lost in the past. For the first six weeks after the shooting, he couldn’t walk out of his office because of the flashbacks. And he still battles with “survivor’s guilt.”

With help, however, he learned to focus on the present. Instead of seeing his students in a pool of blood when he walked into the hallway, for instance, he would visualize them giving him a high five or performing on a stage.

“It’s all about mindsets,” DeAngelis says. “I have two medals. When I would get anxious, I’d grab those medals.” One said, “It’s not April 1999.” The other had the current year.

He hangs onto the past, but mainly for inspiration. Every day he says the 13 names out loud “to give me strength to continue to do something that I can to make a difference so another Columbine doesn’t happen.”

One of the most powerful weapons against adversity, DeAngelis told me, is kindness. He saw it lived out many times by the students, faculty and staff at Columbine, but perhaps the best illustration came from a non-student.

Gerda Weissmann Klein, a survivor of the holocaust, spoke to the Columbine students during one of the early anniversary ceremonies. She was 90 at the time, DeAngelis recalls. When she was a teenager in the concentration camp, she told them, her best friend found a raspberry in the barbwire fence and gave it to her. That friend didn’t survive the camp. Never tasted another raspberry.

“That selfless gesture has stayed with me throughout my life, inspiring me to give to others in memory of her unfulfilled life,” Weissmann told the Columbine students. “You, the young people at Columbine, … will serve as guiding lights for the youth of our entire nation and world. Thus, you will be able to turn pain into healing, ignorance into enlightenment, and hatred into love.”