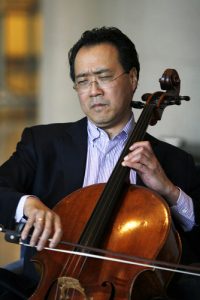 I took a lesson from the great cellist today, and it wasn’t about music but about making a difference in the world.

Yo-Yo Ma has—besides one of the world’s coolest names—a well-earned reputation as an international performing virtuoso on the cello. You probably know who he is; maybe you’ve heard some of his world-famous recordings of the music of Bach or his South American tango recordings.

But have you heard him lecture on business strategy? Not likely! Nevertheless, I think all people in the business world can learn something very valuable from him, and I don’t mean how to play the Elgar Cello Concerto.

This globetrotting musician has just embarked on a new tour that he calls “The Culture of Us.” Here’s what he told Time magazine about the reason for it. “What we each do—which we think benefits us in the short term—actually impacts all of us in the long term. What can we do together that we can’t do alone?”

That’s not a radical idea, but it’s an interesting one. The idea of needing others to get something done right—that must come naturally to a classical musician right? After all, even though he’s out front as a famous soloist, Yo-Yo Ma has spent most of his life collaborating with other musicians, often with an entire orchestra that may include 100 other people. What do they have to do to succeed? The same things you have to do in your workplace: take a motley group of people, each with something they want to express, and make them play together. Getting it to happen takes work, patience, and collaboration. So it’s not surprising that a classical musician would get the idea of helping bring harmony to the world in a larger sense.

Yo-Yo Ma’s Bach Project will take him to 36 communities and six continents. (Sorry, Antarctica!) In each location, he’ll also play all the Bach cello suites in concert and engage people in those communities on a wide-ranging discussion about culture and how it can serve the people there. So far he has been in the Denver area, presiding over a meeting with the Mexican-American community, and in Cleveland, facilitating a meeting with community organizers dealing with change in the world of heavy industry.

“Our civic conversation is so often focused on division,” he says, in a massive understatement, and this small, soft-spoken man is trying to do his bit to change that to a focus on uniting people.

Okay, so you can barely play Heart and Soul on the piano, if that. You haven’t got the time to gallivant off to six continents. You probably don’t feel as connected to the community as you would like, and you may not feel like any kind of expert in getting people to harmonize.

But what is your instrument? What do you know better than other people that you can share? What can you do with others that you can’t do alone?

The way this musician inspired me today goes beyond the beauty of his playing. The message is: Don’t look to somebody else to change the world. Right here, from where you’re standing, reach out and collaborate.

Now we can both say we’ve taken lessons from the great Yo-Yo Ma.