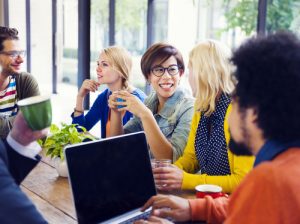 Everybody’s telling you to avoid so many meetings.  Here’s some opposite advice.

It’s almost a cliché that people hate going to meetings, and many of the complaints are legitimate. Meetings take up a lot of time. They distract people from important tasks. To add insult to injury, if you’re the one who called the meeting, some are focused on other things such as daydreaming, looking at their phones, or doing other work while you’re talking. If they are attending remotely, some may even be asleep or ‘multi-tasking’ video games.

So why don’t we just stop having meetings and send texts instead?

Meetings bring people together to talk, and that’s valuable in this cubicle-sitting, headphone-wearing, texting world. They create breaks in each person’s individual existence; they force workers to set aside to-do lists and check in, even briefly.

Finally, meetings offer an opportunity for each person to help someone else. It’s up to you, the leader, to see meetings as interpersonal opportunities and then facilitate that experience. Maybe you’ll even decide to have more meetings–and why not, if you do them right (and bring muffins)?

Mentoring is a philosophy I’ve evangelized in writing, at conferences, and, yes, in meetings. It’s simple but powerful. I believe it’s our calling to help others, with the intent of ensuring they eventually exceed our expectations and even their own.

A common theme among CEOs I have worked with is that they see their job as leading the company. They don’t have to be the best, brightest, smartest person in the room.

I spent a lot of time interviewing leaders for one of my recent books, and one quote from Entisys 360 CEO Mike Strohl really stuck with me:

“Our job as leaders is to give our employees, who are brilliant, the platform from which they can express themselves based on what their passion is. That is where their energy comes from and where they get the audacity to say to each other what is the right way to do something. And then they prove it every single day.”

Can you see how easily that attitude can translate to meetings? It’s not about you; it’s about a productive exchange that moves the business forward, where people help each other to excel.

Filling a conference room can be a bit of a rush. But remember, your job as leader is not to make everybody watch you. It’s to watch them as they excel and even outdo you.

With that attitude, you can see a reason to have meetings and expect them to be productive. It starts by realizing that the most important things happen not during, but rather after the meeting. Here’s what you need to do:

Suppose you’re preparing for a big event–a conference or new-product launch. It’s a great opportunity to have veterans teach newcomers how tasks have been done in the past. Newcomers can teach veterans about apps that could speed tasks up this year.

Your job isn’t to assign these people to talk to each other. It’s to encourage a culture in which you expect people to give to each other in this way. If you’re really sincere about this philosophy–I believe they call it “each one teach one” at summer camp–it will show, and trickle down.

Eventually, your job will boil down to getting them in that meeting and letting them talk.

Use your ears twice as much as your mouth.

A good meeting is one where every participant is both a provider and receiver of knowledge. If you’re “leading” the meeting, ask as many questions as you answer. Your openness to conversation won’t go unnoticed.

I can hear you objecting, “But meetings are too long already!” Yes, but you’re there face-to-face with other people to communicate with them. That should be top of agenda, not an annoying side effect. Most of the detail you’re so eager to convey can be emailed later, but the experience of you listening to them can’t be transmitted by PDF.

Be motivated by desire to cultivate, not blame.

Most people want to grow, thrive, and succeed. Every meeting needs to start from that premise. Offer them more information but also show your willingness to invest in their learning process and to expect the world of them in return.

After the meeting, you shouldn’t be making a list of who is “supposed to” do what, and following up to nag them. If you have communicated your philanthropic spirit effectively, people will want to follow up with you, and you with them, and much less will fall through the cracks.

Use all the tools, spreadsheets, PowerPoints, and Slack messages you want. But use them in service of a positive, caring interchange of ideas. That spirit of mutual support will carry your team to greater successes long after all the information has been doled out.

This article was originally published on Inc.com.